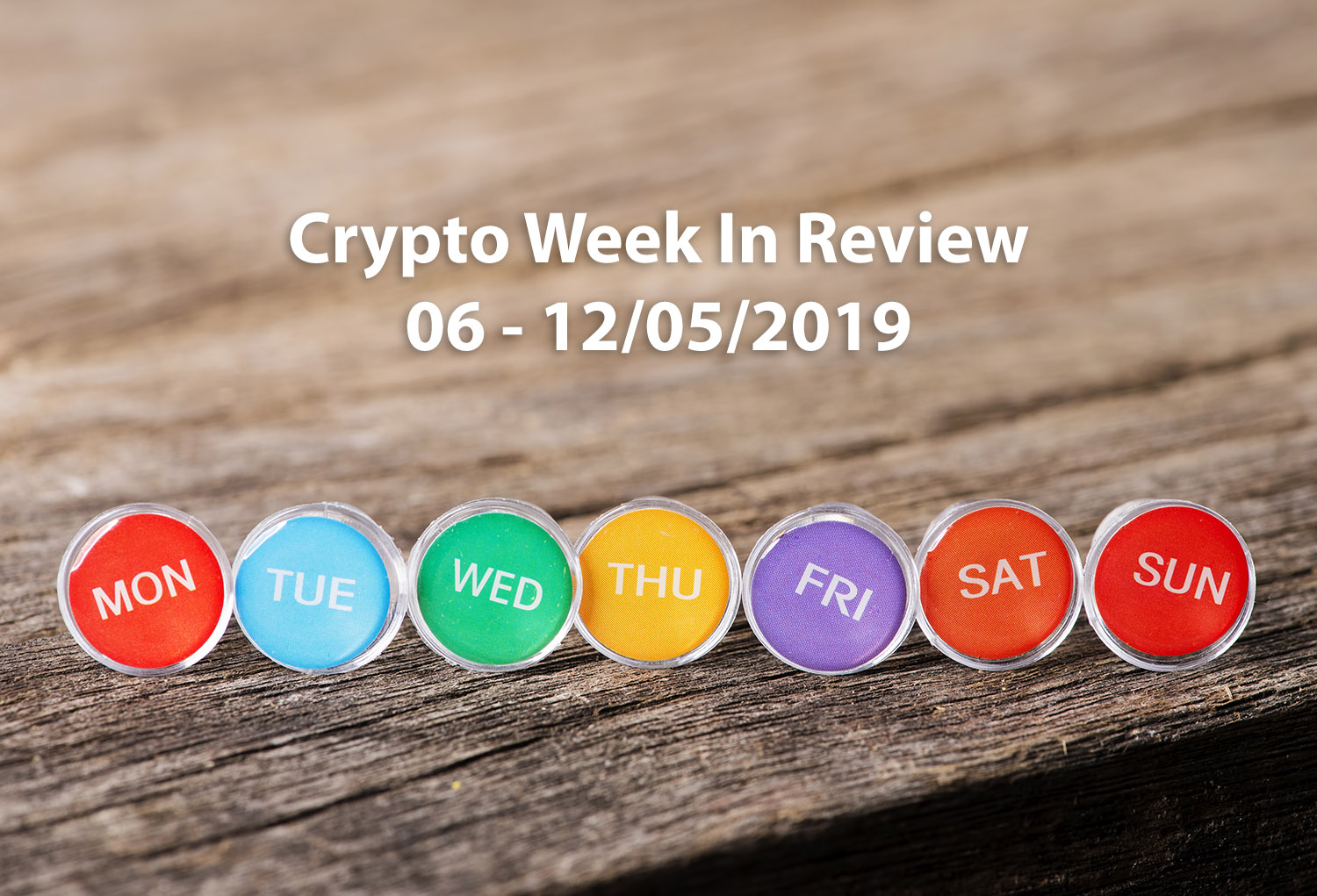 After some discussions and community feedback, we decided it is time to change how our Crypto Week In Review reports look like. Previously we would briefly discuss the most important happening of the day, and we would do that for every day in the week. While it was nice to get a preview of the entire week, we didn’t have enough space to get into some things in greater detail. With this change, we can pick the most relevant information (or two) and discuss it in a more thorough and detailed fashion. Welcome to the fresh new format, we hope you enjoy the read. As you can all already guess, this week we talk about the big Binance hack.

Everyone in the crypto world has heard about this big Binance hack. As an exchange with the biggest volume, they are a pretty big target for hackers – real honey pot. A lot of people in the community have actually been wondering when this attack is going to happen. Now, they can brag they called it. Let’s see how the hackers managed to hack one of the biggest and most popular exchanges.

How Did It Happen?

The security breach was discovered on May 7th. Hackers were able to access users API keys and two-factor authentication codes. It is unconfirmed if they managed to access some other info as well. Apparently, hackers were patient; they waited and prepared everything to execute the hack at the most convenient time. When the time was right, they struck and managed to steal 7,074 BTC which was roughly $40 million at the time. After Binance team noticed the breach, they froze all withdrawals. This also leads to Binance freezing all the withdrawals and deposits for the next seven days.

So, if you have an account on Binance, make sure to change your password and all other authentication methods. We feel a bit like a broken record for saying this but: not your keys, not your coins! Previously, Binance CEO, Changpeng Zhao (CZ) talked about security, and we agree with him about one thing –  there is no perfect way to protect your cryptocurrencies. But keeping your coins on an exchange is far from perfect.

Users who were damaged in this attack didn’t have to worry for long. CZ said they would be compensated from the #SAFU fund (Secure Asset Fund for Users) and that they have enough BTC to cover the loss. This fund is continually replenished from 10% of all trading fees which are collected by the exchange. It was launched to protect Binance users in extreme case scenarios. We can safely say this big Binance hack was such a scenario. One thing is also certain – CZ and his team are very unhappy with this hack. A lot of people started discussing this incident and Jeremy Rubin, BTC core developer suggested to reveal private keys for the hacked coins and coordinate a block reorganization to undo the theft. This lead to an ocean of tweets, disbelief and general disgruntlement.

Specifics Of The Reorg

What Rubin suggested was to get the majority of miners onboard with this reorg plan. In doing so, miners who agree to follow along with the reorg would have the majority of the hashpower, and they could reverse the chain. The transaction history could be adjusted, and funds that were stolen wouldn’t be in the hands of hackers anymore. This wouldn’t be a complete rollback or returning funds to Binance. Reorg would be constructed to distribute stolen funds to miners. Jimmy Song, another BTC developer, explained that this rollback would be more expensive than the hack itself since a day of mining costs 1800 BTC. CZ considered the pros and cons of the idea but in the end, dismissed it and didn’t mention it further as a solution.

Just because CZ abandoned the idea, it doesn’t mean the community forgot about it. Au contraire, this sparked quite a fire in everyone. The vast majority strongly opposed even the thought of reorg. If some kind of a reorg happened on Bitcoin blockchain, it would have a huge impact. Its credibility could be damaged, community and chain would probably split. This Reddit post explains some of the implications. In reality, this would be hard to pass and probably would never happen. Immutability is one of the most important features of Bitcoin, but it is important to keep in mind that transaction can be considered as final only when it costs more to reverse it. In other words, the transaction can be considered as final only when the equal amount of Bitcoins transacted has been mined. Hence, when transferring larger amounts, always wait for a minimum of 6 confirmations.

If Binance detected the hack earlier, transaction could be reversed much more easily if the similar action would be made within a first few blocks. And there wouldn’t be much opposition to this as temporary forks/reorgs can be considered as normal. But this again raises concerns of finality on POW blockchains like Bitcoin and cements the need to wait for a sufficient amount of confirmations. 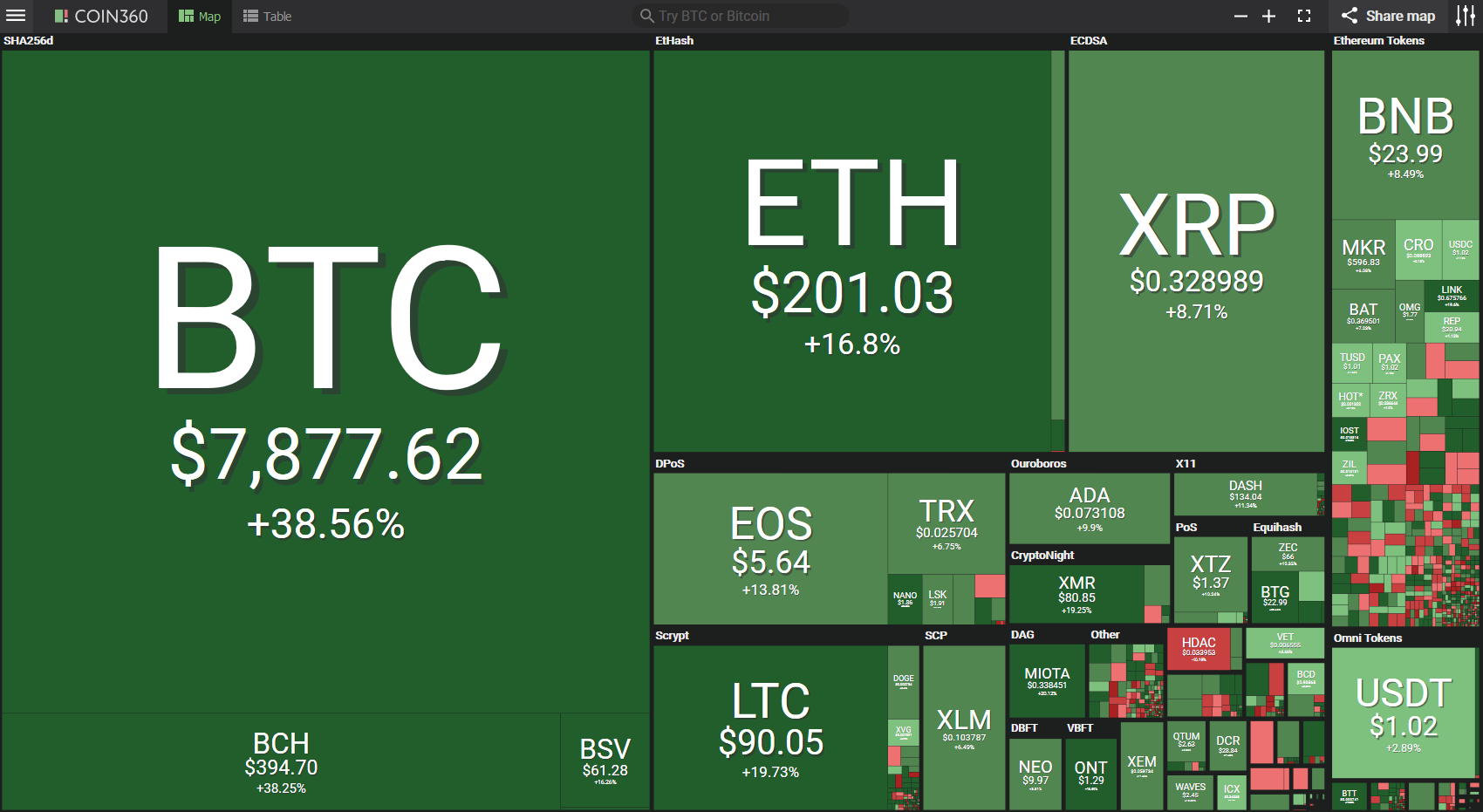 What a week guys, what a week! If you stuck with us and grinded through the bear market, congratulations are in order. It’s starting to pay off as the trend convincingly turns bullish. As BTC is floating just under $8k at the moment, we think it is safe to say that the bear market is over. Let’s hope we didn’t jinx it.

Time to take a look at what exactly Bitcoin did. Firstly it perfectly tested support area that we outlined in our previous report, quickly bounced from there and three days later smashed through the biggest resistance around $6k that we all thought would be much harder to break. Pure magic happened, and BTC brought us a very nice surprise. The following days were jaw-droppers, resistance after resistance kept breaking under BTC’s sword, and here we are. All of this was fueled by the record volumes across many exchanges. Can BTC break $8k as well or it’s time for a pause? We won’t try to guess what happens next. Instead, we’ll just sit back and enjoy watching this magnificent run. 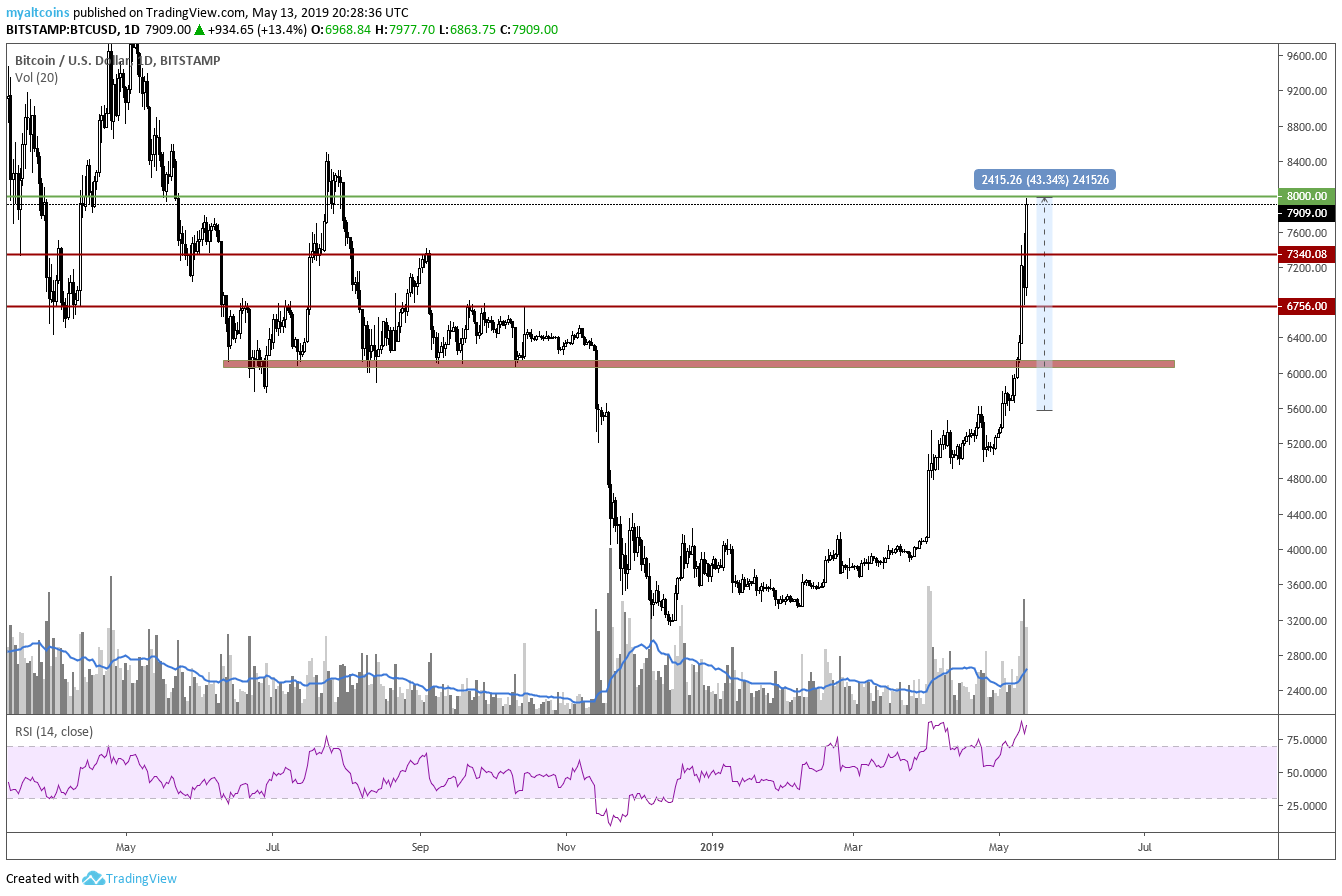 Altcoins were in a deep BTC shadow for the past week. As usual, when BTC soars; altcoins are reaching new lows when you look at their BTC pairs. They are patiently waiting for the big daddy to cool off so that they can go on a well-deserved run. If you kept your portfolio in BTC, now is a good time to start DCA-ing into your favorite altcoins. Or you can play it safe and wait for some confirmation if you don’t care about sacrificing low entries. A different picture can be seen when you look at their USD pairs. Just look at the screenshot above, most high caps had a good week (albeit pretty shy for the altcoin standards), and they pumped a bit with BTC. BCH and MATIC were rare exceptions though. BCH did its best to keep up with BTC, and it mostly succeeded. Percentages are almost identical.

ETH broke out of the rectangle and is now struggling to break resistance we outlined on our previous chart. Sorry ETH but you will probably have to wait for BTC to cool off a bit.

Let us know how do you like the new format on Twitter. And don’t forget that we are not financial advisors, trade/invest at your own risk.