We are happy to share another Crypto Week In Review! As always, we bring you a variety of news, fresh off the stands. We talk a bit about Bottle; a Bitcoin browser used to upload files. Did you know you can actually upload files to the Bitcoin blockchain? We also celebrate Nano’s 5th birthday with some novelties from this cryptocurrency. Bitfinex continues its plans like Tether scandal didn’t happen. Now they announce they will be having an IEO for their token called LEO. We are curious to see how this will culminate. We also mention Shellbot malware update and what threat it poses for miners. Enjoy our #26 review of the happenings in crypto space!

Did you hear about Bottle? Bottle is a Bitcoin browser. By using Bottle, a person can upload files to the Bitcoin blockchain, and those files will remain there as an unchangeable transaction. As soon as you upload something, it is attached to the Bitcoin blockchain. A Bottle browser is then used to access the Bitcoin network and surf it for potential uploaded content. If someone wants to create new apps or some kinds of interactive pages, they can also use Bottle and Bitcoin network for it. This project has the potential to achieve decentralized file distribution on a larger scale. Let’s see how far will they go with their achievements! You can check out Bottle here.

HTC was the first company to release a blockchain phone. Now they are planning to launch the second generation of their blockchain phone – EXODUS. It is planned to come out by the end of the year. One of the main features the phone will have is, naturally, a cryptocurrency wallet and it will also support all kinds of dapps. Phil Chen, HTC’s decentralized chief officer, said:

The new phone will extend its blockchain apps to include other areas such as browsing, messaging, and social media.

More and more companies with smartphone models are integrating crypto options for their users, Samsung is one of them too. Which company is next and how deep will they manage to integrate blockchain technology into their devices?

Five years ago, on the 1st of May, Colin LeMahieu started NANO, then known as RaiBlocks. At first, LeMahieu started Nano as a hobby, building it as a solution to the existing problems of other currencies. Happy birthday to Nano! With this news comes another important update – V19 Solidus has been released on testnet. One of the biggest new features Solidus has is confirmation heights. This means that a new field exists which will record the height of the last confirmed block on all accounts. If you have been making NANO transactions in the past few days, you will also notice prefix for NANO addresses has been changed. Previously it was xrb_address, and now it is nano_address. If you have an older version of a wallet on your mobile and want to send the funds, just change the nano_ prefix of a new address into an xrb_ one (and check if the rest of the address is correct) and you will be able to send the desired funds, preferably to a new, updated wallet. If you want to learn more about Solidus network, check out this medium blog post.

If you have been online for a while, you probably heard of Shellbot. It is a malware which was discovered way back in 2005, and it can be used for crypto jacking. Unfortunately, as of recent, it has received a major update. Original Shellbot was able to brute-force the credentials of remote access services on Linux servers which had weak passwords. Then the malware would mine Monero, specifically because of its privacy features. Now, there was a Shellbot malware update. It has the capability of spreading through the entire infected network and shutting down other miners which are running on the same machines. The control center of the malware is an IRC server. Attackers use it to deliver commands and check the status of already infected servers. It is unconfirmed, but Shellbot is reportedly making around $300 a day. This number will only grow as the malware spreads.

In our previous Crypto Week In Review, we tried to sum up all the happenings with Bitfinex and Tether drama. As a quick reminder, after stolen/lost funds, Bitfinex took out 850 million USDT to cover losses. Now Bitfinex is conducting a $1 billion IEO as it says in their whitepaper. Apparently, they are planning to launch their own exchange token called LEO. LEO will be first offered to private investors, and after May 10th, if there is any allocation left, it would be offered to the public. What do you think about this upcoming IEO?

Coinbase doesn’t have a lot of luck with the employees lately. In the last six months, they lost three senior executives. Now, their CTO, Balaji Srinivasan announced he is leaving the company. There wasn’t a lot of info about why he did it. The only thing he mentioned is that he enjoyed his time working for Coinbase and that now it is time to catch up with everything he missed out on while being busy working for the exchange. Coinbase acquiring of Neutrino resulted in a lot of bad publicity. Could senior executives leaving be the aftermath?

Recently Bluewallet was released. This is a wallet application for Lightning Network. Now, Bluewallet is launching a version of their wallet which is compatible with Apple Watch. How will it work? Users will just pop up a certain QR code, which can then be scanned by the other user. After this swift and simple action, a person who scanned the QR code will be able to send and receive payments. Company commented:

It’s a small experiment we’re doing to put wallets on the watch. The first releases will be simple, allowing you to receive lightning payments.

Who knows, if this experiment goes well, maybe wallets for smartwatches will be the new deal. 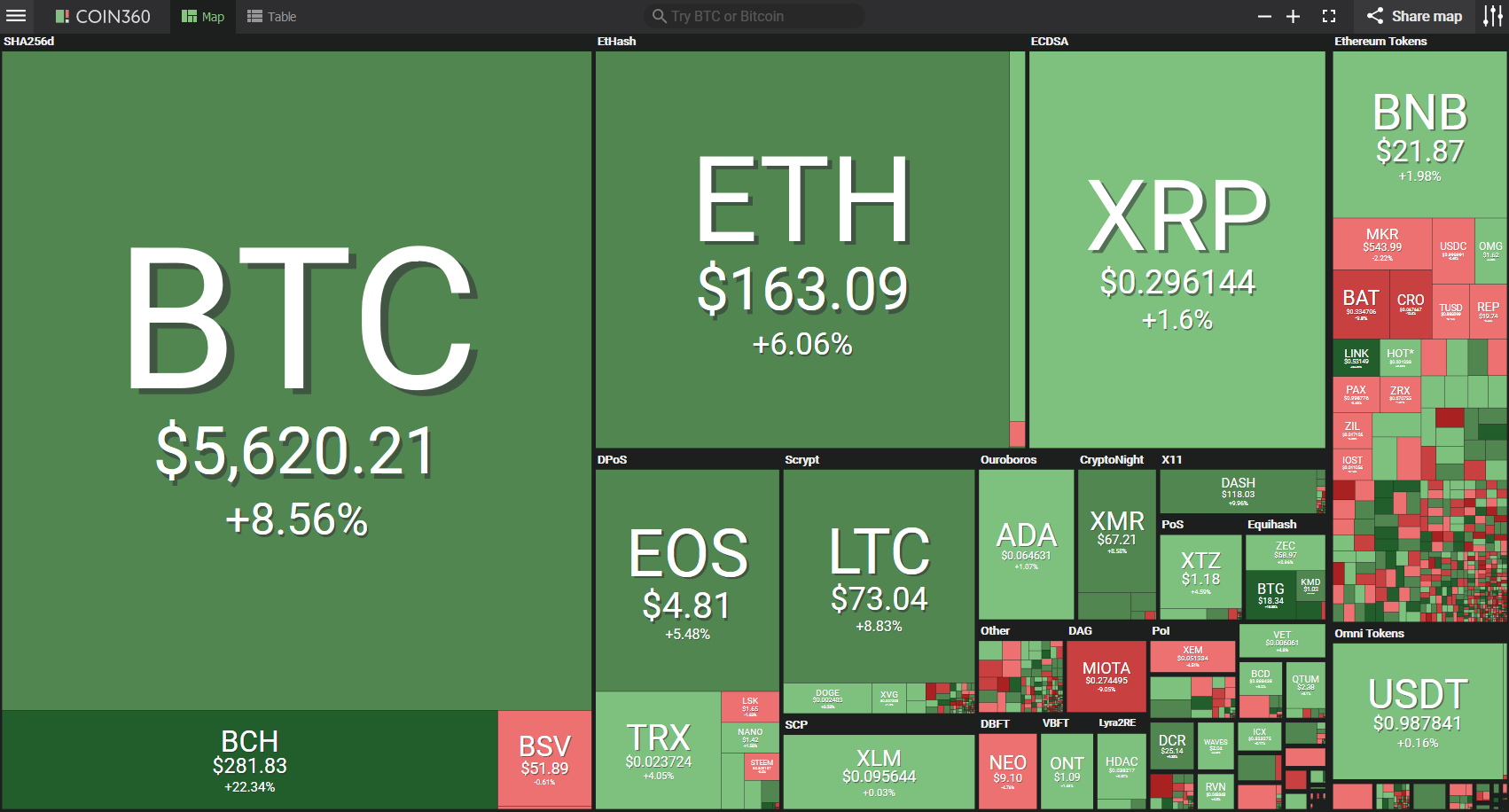 BTC spent the week on a steady rise and on Friday it punched through the first resistance area we outlined in our previous report. However, it didn’t have enough volume to reach the next area that we were targeting. Instead, it got rejected at the first resistance that served as support way back in June-2018. Let’s see if bulls have enough power for a test of the $6k area or not. 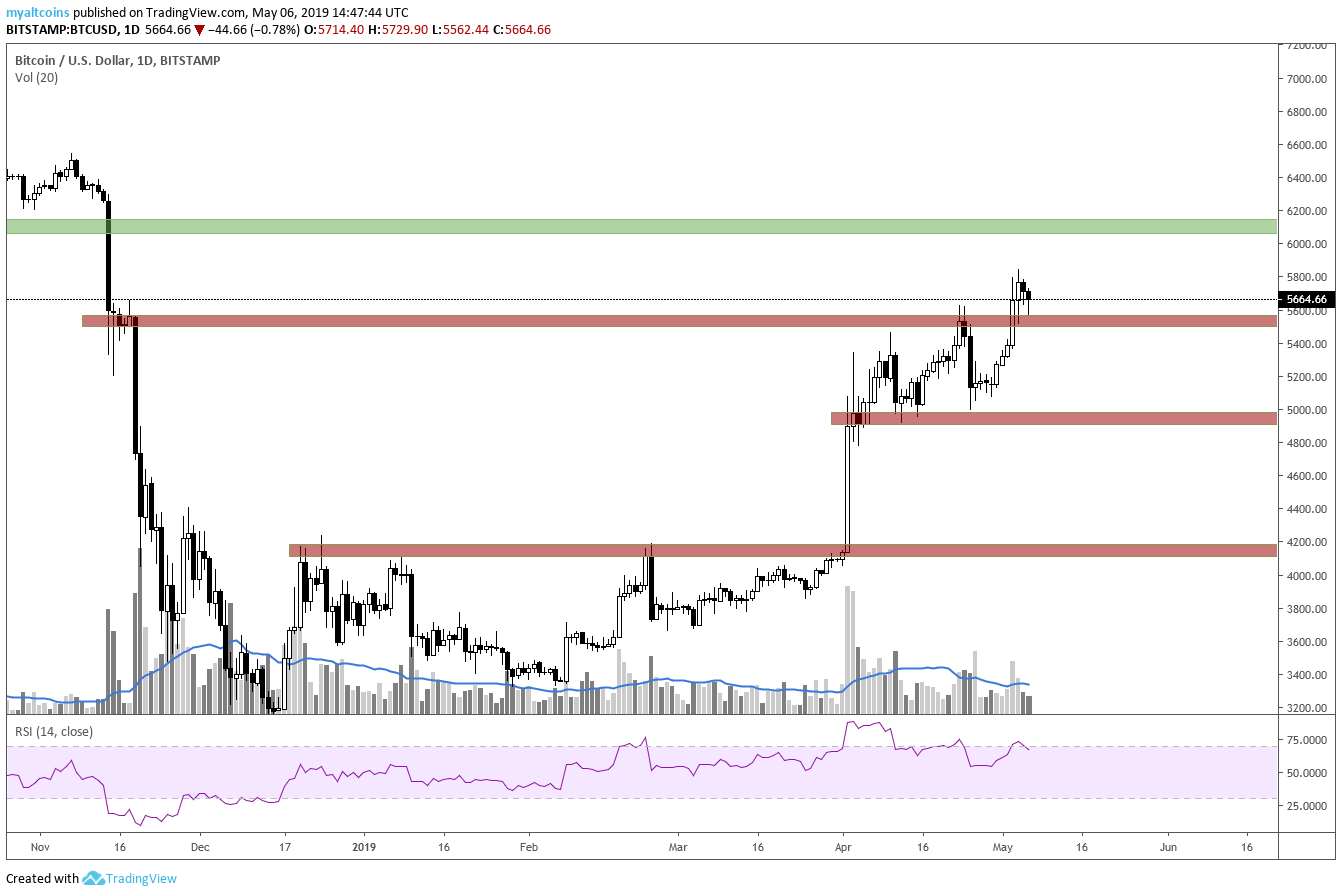 ETH & other altcoins spent the week in BTC shadow. Most high caps were consolidating and ended the week with slight gains. BCH is the only exception; it pumped with BTC and gained 22% in the past week. ETH was mostly ranging in the rectangle that can be seen below. Currently, it is breaking up; we will see if it can test and break through the upper levels in the coming weeks. 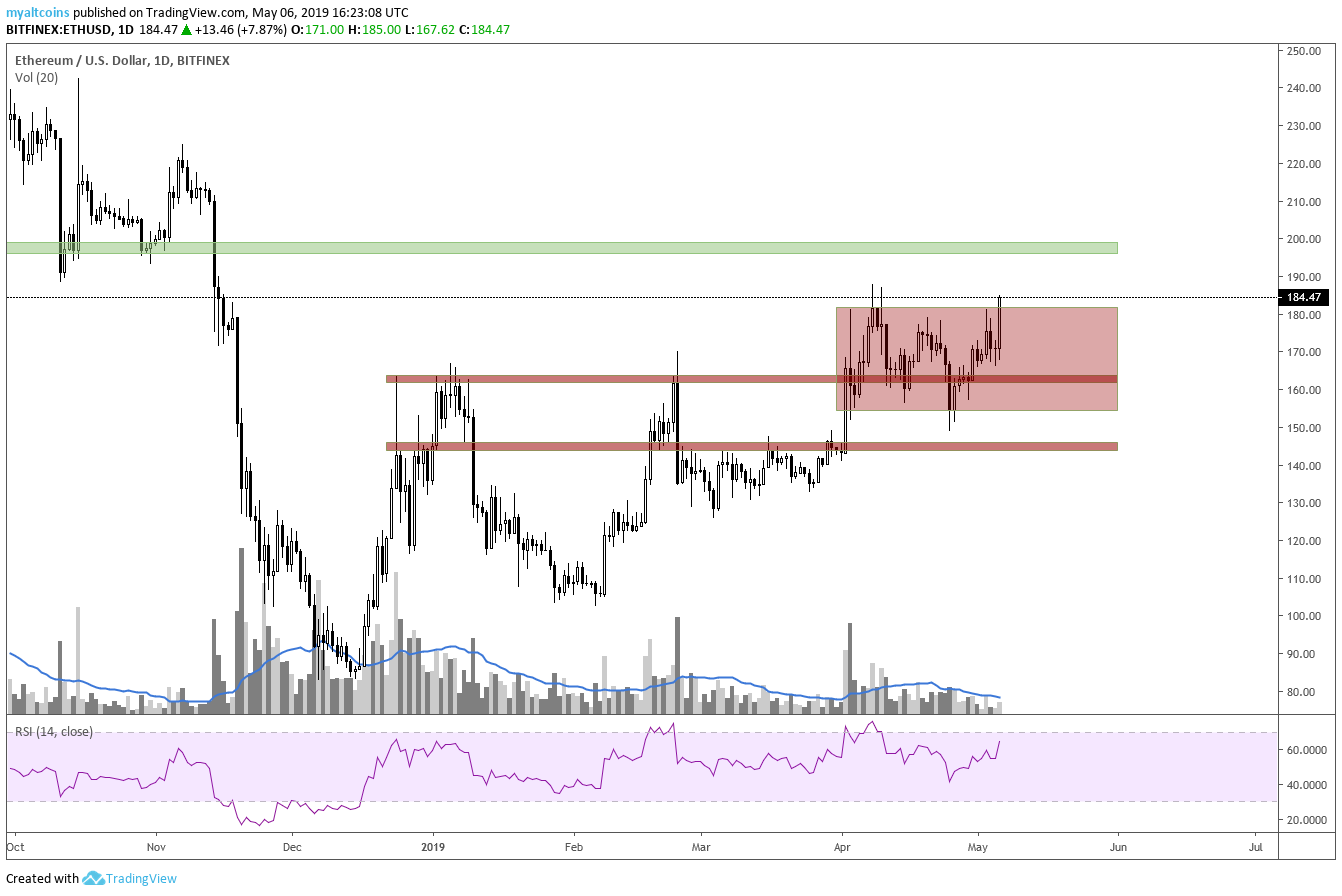