Welcome to the newest issue of Crypto Week In Review – last one in April. This week we explore a variety of topics. It is always nice to see crypto being used in a variety of situations — this time we see crypto in a charitable campaign called AirDrop Venezuela. We do a follow-up on Binance DEX which had a smooth launch. More and more speculations come up about Samsung stepping up into the world of crypto. If they truly do, this could potentially be huge for general cryptocurrency development. One other thing we talk about is the newest Wirex and Stellar partnership. Tether and Bitfinex had a scandalous week, so we decided to cover that in the simplest way possible. Is it just us or any time Tether is mentioned, it is somehow in a negative light? Read all this and much more in our Crypto Week In Review!

Venezuela is no stranger to crypto. But it is also a known fact that Venezuela has a lot of financial issues. Recently a charitable campaign called AirDrop Venezuela was started to help Venezuela. They want to enable sending $1 million in crypto donations. So far around 60,000 beneficiaries registered and raised around $270,000. Campaign leader is Steve Hanke, a professor of economics, and he commented:

[AirDrop Venezuela] is purely humanitarian, there’s really no particular political motivation. It’s just to help people to give them some purchasing power.

As we mentioned, Binance DEX was supposed to launch these days, and it did. This release comes a week after Binance launched their native blockchain – Binance Chain. Binance DEX trading is supposed to go live at a future, unspecified date but users can already create wallets on the platform. This wallet can be Binance’s official Trust Wallet or any other third-party wallet that supports Binance Chain. Making a wallet isn’t the only option users have now – they can also access Binance Chain Explorer, public data nodes and APIs. Changpeng Thao said he hopes Binance DEX will bring a new level of freedom to their community.

It is no secret that Samsung has had its eye on crypto for a while. Their release of their last flagship model – Galaxy S10 smartphone – only confirms these rumors because of the integrated crypto wallet the phone has. Now there are rumors that Samsung might develop a public/private blockchain with its own token. So far source which leaked this to CoinTelegraph said the token would be called Samsung Coin and it will be based on Ethereum. All of this is still uncertain until Samsung makes an official announcement. Another news, which makes us think Samsung might go deeper into cryptocurrencies, is that Samsung invested $4 million in a wallet app for smartphones called ZenGo. And it doesn’t stop here. Samsung also invested almost $3 million in Ledger. Would you like to see Samsung enter the crypto game?

Wirex, a cryptocurrency payment processor and Stellar (XLM) announced a partnership. For those who don’t know, Wirex is a service which allows users to spend their cryptocurrencies via Visa card. Previously, Wirex offered support for nine tokens, and now it is adding XLM. Also, they plan to launch 26 stablecoins pegged to fiat. So far, stablecoins are mostly pegged to the US dollar. This way the company would offer a variety of fiat currencies and enable support on an international level. These would be the first stablecoins which support instant conversion into crypto or fiat currencies. 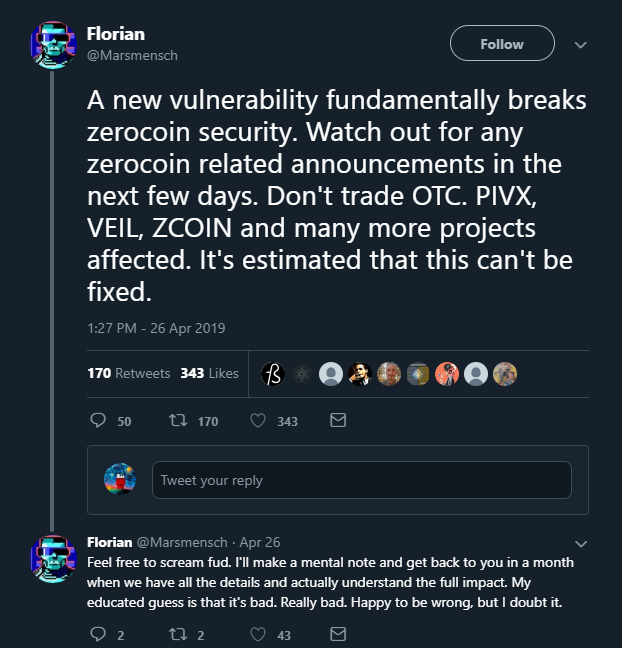 Zcoin officially replied with a disclosure on the Zerocoin vulnerability. Previously their warning system alerted them of some irregularities, and they immediately contacted pools and exchanges to disable Zerocoin spends as they investigated the issue. Zerocoin also warned other projects which utilize Zerocoin – PIVX, Veil and Gravity Coin – of the issues. They proceeded by making a Slack working group with the mentioned coin teams to work on finding the solution. After the root cause was found, they released an emergency update to fix issues that have been identified. You can read the full disclosure here and learn all about the issues which occurred.

Independent Security Evaluators (ISE) is a security consulting firm. They published a report about private keys for Ethereum. Adrian Bednarek, a senior security analyst who works for ISE, accidentally discovered a hacker. He was actually researching for a client who wanted to implement their own wallet with the integrated key generating algorithm. In the end, he found 700 weak private keys. They were regularly used by multiple people. A so-called blockchain bandit managed to collect around 45,000 ETH by simply guessing the weak private keys. Bednarek was thoroughly interviewed by CoinTelegraph, and you can read the entire interview on this link.

This week there was a lot of buzz about Tether and Bitfinex. Lately, when we hear about Tether, it’s either negative news or some kind of drama. Apparently, Bitfinex lost $850 million and to cover that up they used USDT funds to secretly cover this shortage and loss. The New York attorney general’s office managed to get a court filing that Bitfinex’s operator – Tether Limited – is in violation of the New York law. Apparently, by covering their losses with Tether, they might have defrauded New York-based crypto investors. Bitfinex denied these accusations. They said in a blog post that their platform and Tether are financially sound. Also, Bitfinex claims the court filings are full of false accusations. During all this drama and accusations, Bitfinex also withdrew $90 million from the cold wallet. 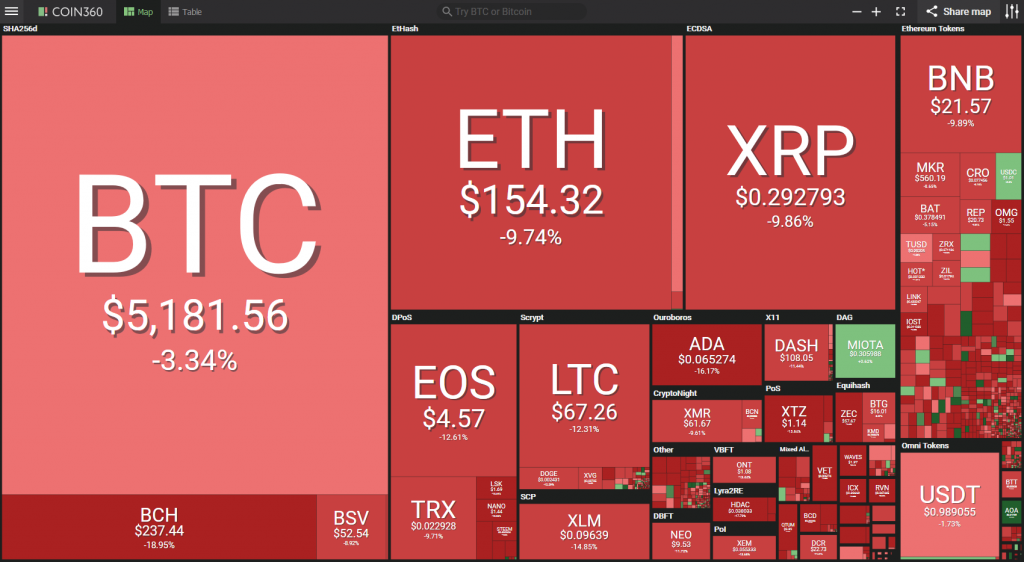 BTC was strongly rejected at the resistance area we outlined in our previous report, and the dump commenced. Many traders are connecting the dump with the drama that is surrounding Bitfinex. But it happened just when BTC faced strong resistance, coincidence? Currently, BTC is located in the middle of nowhere. 20 day EMA is acting as resistance though. We can see doji candlestick formation on the past four days which could be taken as a signal that bullish trend is nearing its end. Let’s see what is BTC going to do next. 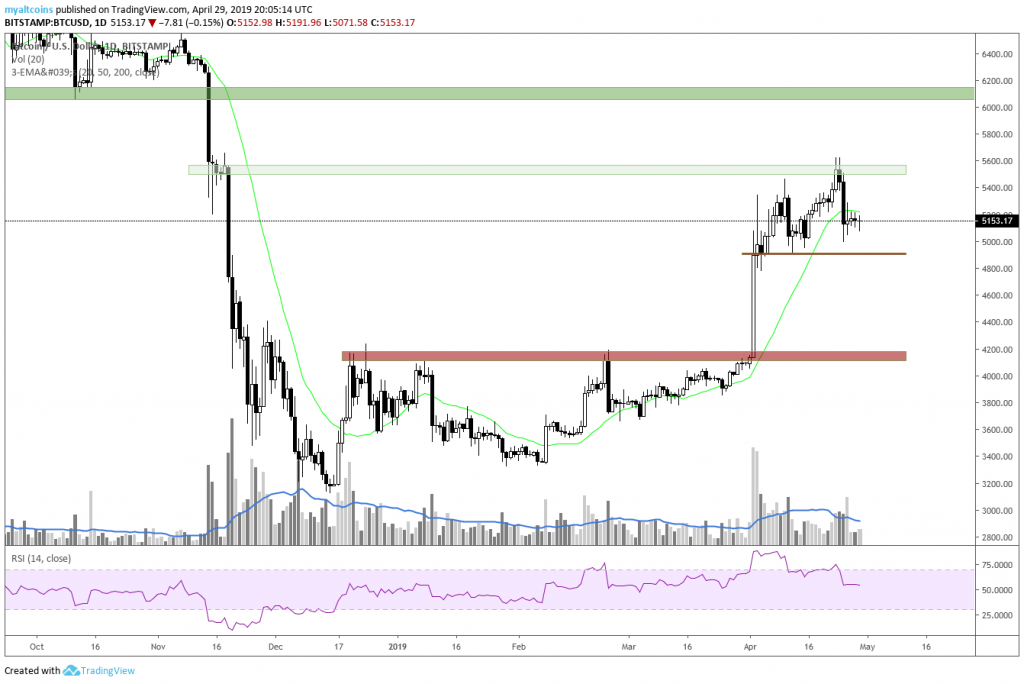 Market blood can be seen across the board. Like usual, past week top gainers are this week’s top losers. Even USDT is red this week. ETH dumped through support area that we drew on our previous chart, and the price is currently floating inside that area. We are likely going to see ETH visit the support area at $145. 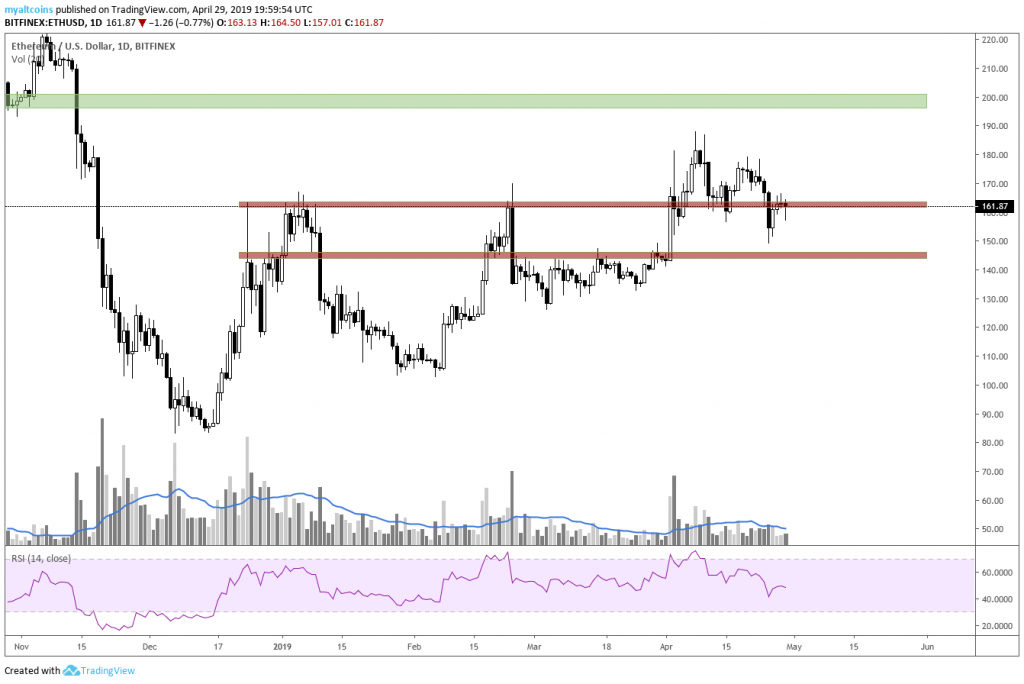