Welcome to the Easter edition of our Crypto Week In Review! Happy holidays, to everyone that celebrates. This week we bring a lot of novelties! We see a first live game of BTC clue hunt. The reward for the winner is 1 million dollars in BTC! Do you plan to play?

Another thing we’re happy to (finally) see is a CMC app for Android, and a revamp for iOS users. We keep tracking Nyzo, so we bring some updates about the project, be sure to stay in tune. Monero also celebrates its 5th birthday! That project has been around for a while now, and it has a strong community behind it. Read all of this and more in our latest Crypto Week In Review! 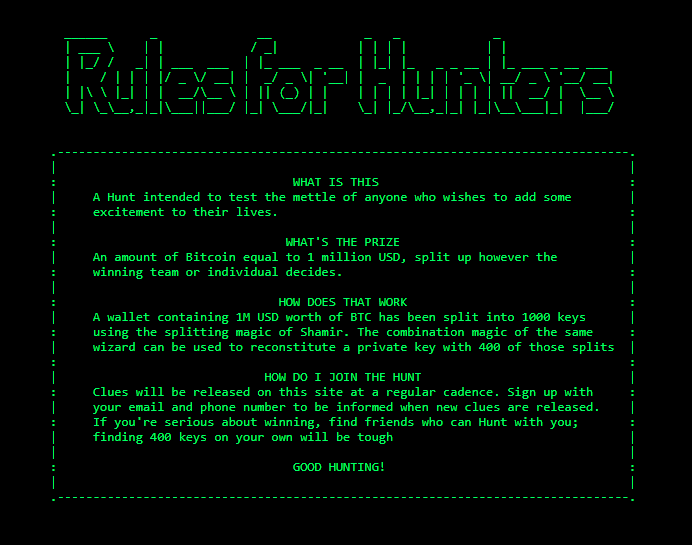 The screenshot you can see above was taken from Satoshi’s treasure website. To explain it even more simple – it’s a live game anyone can play and the reward is Bitcoin, to be more precise $1 million in Bitcoin. This was explained and published by Proof of Work, and they clarified everything in detail. The million dollar hunt uses an algorithm which takes a string of text and splits it into a certain amount of pieces. This string of text is, of course, a secret. These pieces have to be collected and assembled to reconstruct the original secret. So, when people behind this learned about the algorithm, they wanted to use it for this hunt. They already released the first clue. People are making teams, various Telegram groups, discussing all kinds of strategies and trying to anticipate the next clue. Are you going to play?

Like most of the community, we are just happy to see CMC release an Android app. Like it or hate it, CMC is still go to coin tracker for the vast majority of users. Previously CMC only had an app for iOS users, and even that edition got a revamp with this new release. Without much describing we have gathered a gallery of screenshots which show what app has to offer.

The app design resembles the original site, but we really like there is also a dark option. One thing we really dislike is the ads you can see in the app. The first tab has a cryptocurrency index which can be listed according to your favorites, USD price, rank, and some other factors. The second tab is your portfolio. You can add any kind of currency and track all kinds of currency changes. In the Tools tab, you have various options which can help you with math – global metrics, currency converter, comparison of currencies and you can also get price alerts. Discover is also an interesting tab which offers various news and blog updates by CMC and another cool thing. You can see top gainers and losers in last hour/day/7 days. Great app CMC!

Snipe, Nyzo community moderator, finally launched Nyzo payment gateway. It is basically a marketplace where users can put up sell offers for various (digital) goods and receive payments in Nyzo. The design is nice and simple. This clearly demonstrates that community efforts can go a long way in growing adoption of a specific coin. On a related note, Nyzo devs released an important verifier update which brings significant performance improvements. You can read release notes here and here. Afterward, update your verifiers as usual. Just don’t forget to open a UDP port. Also, performance grading has been improved; verifiers should now cast more accurate scores.

Long expected Binance Chain has been finally launched. Soon, users can swap the native token – Binance Coin (BNB). This swap is to be expected live next week, probably on April 23rd. This blockchain was announced last year. Binance Chain Explorer and the Web Wallet will be available to a selected few in beta testing and available to the public next week, around the same time as the swap. The exchange also provided information for the conversion of ERC-20 BNB tokens to Binance Chain BNB coins (also known as BEP2 coins). As more users convert their BNB coins to BEP2 coins, Binance will release more BEP2 coins and burn the proportional amount of ERC20 BNB. This way the total supply across both of these networks will be consistent and constant.

We always get excited when the wider public gets into crypto because it potentially leads to outsiders and skeptics embracing it. This time we are talking about Serena Williams, a world famous tennis player. In her Instagram post, she published that in 2014 she launched her own investment business called Serena Ventures. In this venture, she invested in over 30 companies, including Coinbase. This portfolio was focused on companies which were in the early stages and showed promise. Investing in Coinbase certainly paid out for her! Maybe she will continue to support more crypto businesses in the future.

Last week we mentioned Craig Wright, an Australian entrepreneur who is famous for backing BSV and unofficially considered the main representative of it. He was mentioned in a negative light, creating drama on Twitter, suing people because they deny his claim of being the real Satoshi Nakamoto. This drama led to BSV being delisted from Binance and some other exchanges followed – ShapeShift and Kraken now also don’t support this currency. As a result BSV price tanked. The screenshot below shows the price action of BSV for the past week, ever since Binance delisted the coin. 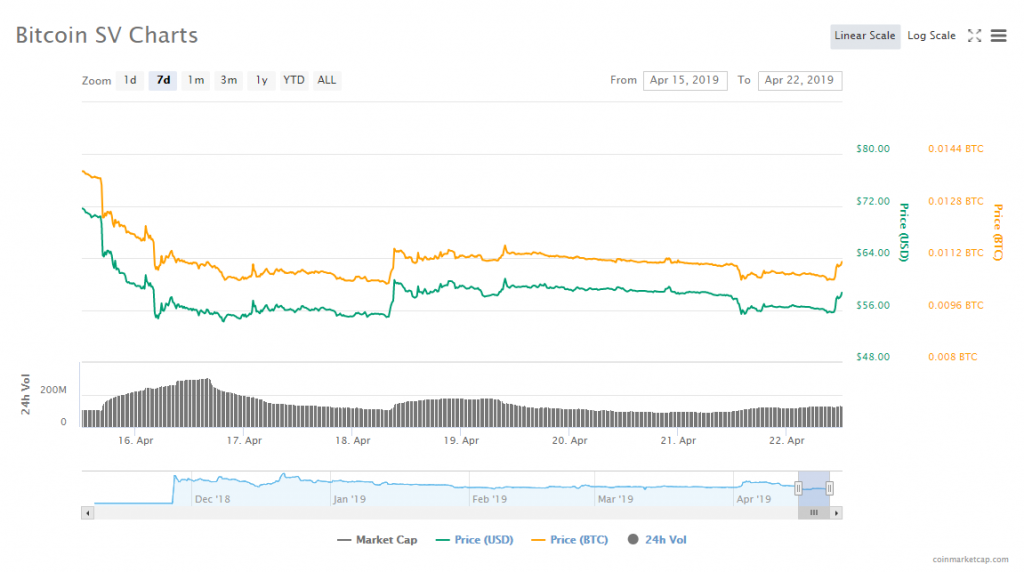 This week Monero celebrated five years of existence. Happy birthday, Monero! This privacy-focused cryptocurrency launched in April 2014 and since then it has been mostly crowdfunded – almost entirely developed by volunteers. Depending on people’s time and availability there are around 100 to 200 volunteers who constantly work on the project. Developers behind Monero say that the project isn’t just about building a blockchain but also about redefining digital privacy on a global scale. Diego Salazar, one of the Monero contributors, explained that they are not just trying to make global digital money, but teaching everyone about their rights to privacy. Salazar also talked in detail about Monero and its five-year development. More info about it can be found in a CoinDesk article. 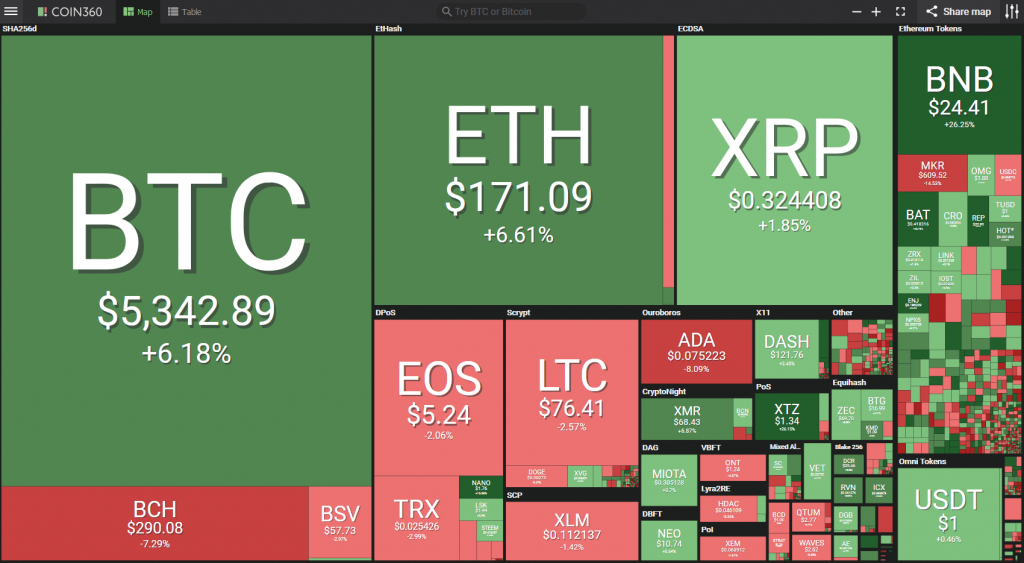 BTC is slowly rising as we are writing this report. Our targets remain the same. The zones where BTC could experience strong rejection are approaching. 6% gains in the previous week, let’s see what the next one brings. 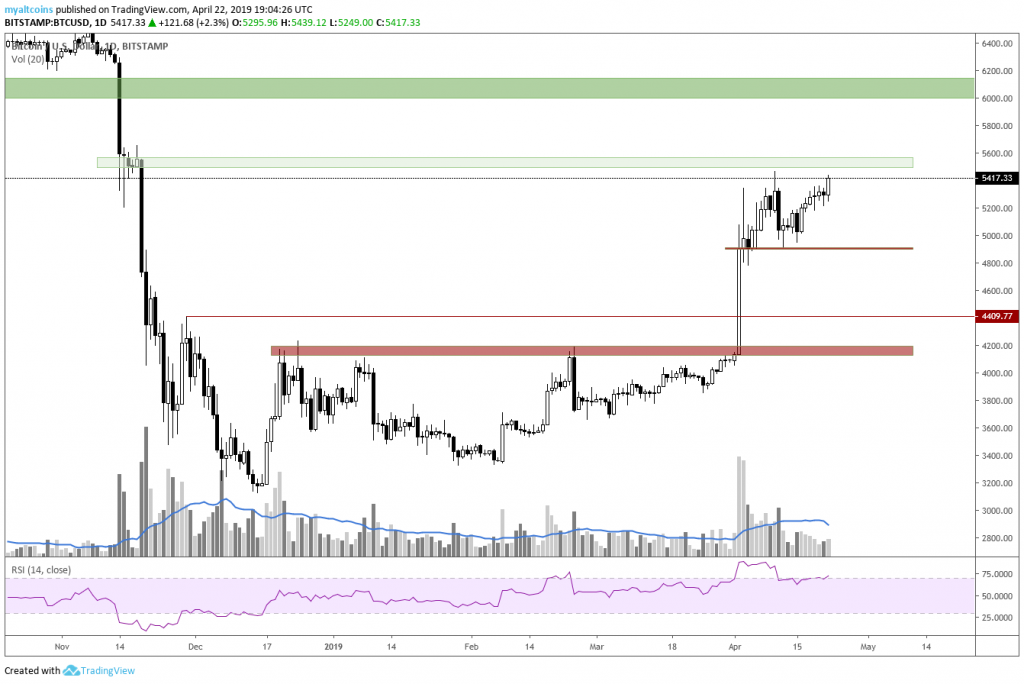 ETH finished the week with 7% gains. Price closed above the resistance zone we outlined in our previous report and is now trading comfortably above it. We still expect a test of the upper zone. There is no significant resistance before that zone on the weekly chart. Let’s see how it plays out.

BNB and XTZ are this week top gainers in the larger cap category. BNB has been fueled by mainnet launch while XTZ had some news regarding real estate tokenization built on top of its blockchain. 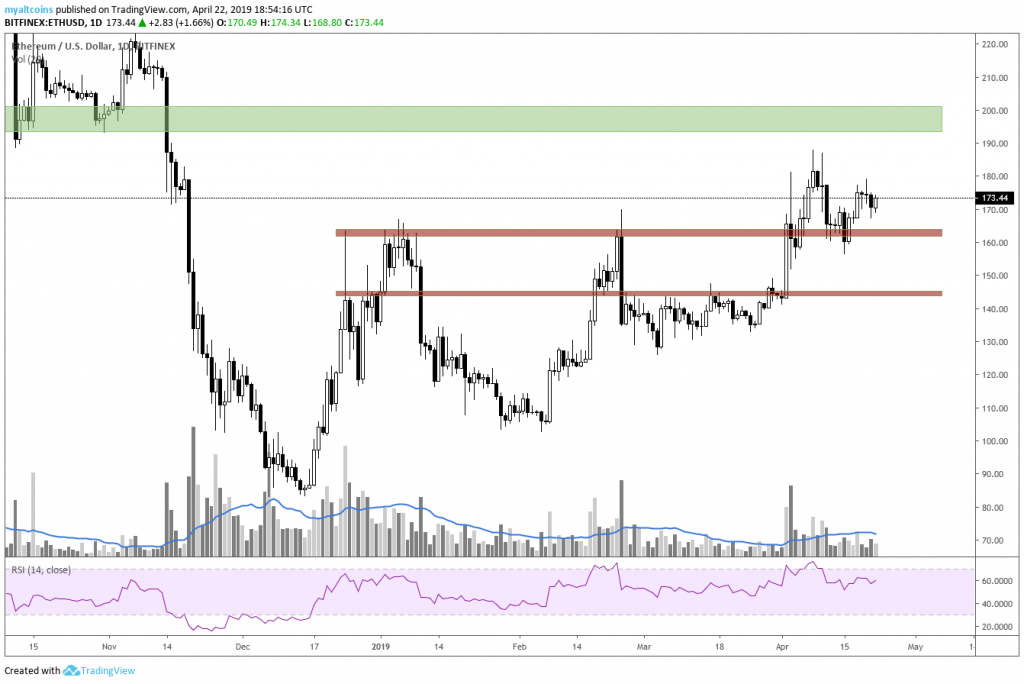