Have a look at our latest Crypto Week In Review. We have plenty of interesting news going around and it has been an interesting week on the market where everyone is talking about Bitcoin. Other than that we bring some exciting news about various altcoins like Beam, Nano and BitCash. Another altcoin news is that Nyzo exchange listing has arrived! Other than that, Lightning Network seems to be unstoppable and makes another great progress. Enjoy the latest update in all relevant and amusing crypto news.

We talked a lot about MimbleWimble coins. One of them was Beam, who had a very successful network launch and we continue following its progress and developments. Japanese company for employment, Recruit Co., Ltd. invested in Beam. This investment was made through a fund Recruit has, which is called RSP Blockchain Tech Fund Pte.Ltd. Beam received an investment of $25 million and they confirmed it on Twitter by stating that it helps Beam fulfill its mission in Japan when it comes to deploying a compliant, scalable, and confidential cryptocurrency.

Beam isn’t stopping their fast progress and vast plans. They announced an initiation to present a MimbleWimble lightning network. This would help all MW based altcoins have a bigger breakthrough for wider adoption and payment usage, just like Bitcoin but much more private. We are looking forward to tracking Beam’s progress further.

We already talked a lot about Lightning Network so let us just quickly recap. Lightning Network is a second layer payment protocol which works on top of Bitcoin blockchain as a solution for scaling issues. We mention Lightning Network again because of its growth which was amazing lately. Six months ago the network could handle around ₿85. Now, it is around ₿710. In the last month there has been a 30% growth in network capacity and the average fee for transactions has been 1 satoshi. If this progress and testing for the Lightning Network continue to be so successful, this might be the game changer for Bitcoin. 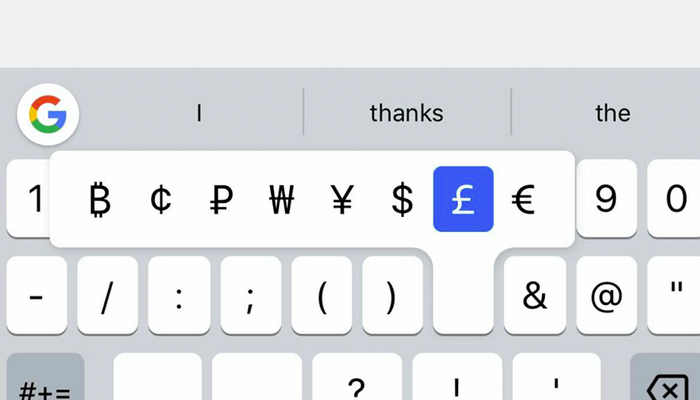 And yes, not really breaking news, but Google Keyboard introduced Bitcoin symbol (₿) along the other fiat currency symbols. You might have noticed us using it in this article. It is such a small but a very welcome recognition.

A few weeks back we talked about a rumor of Samsung’s new phone having a crypto wallet. Now, the same phone, Samsung Galaxy S10 is being announced. And there is no doubt. It has a crypto keys storage. This storage isn’t anything new, it is not any more secure than other hardware wallets like Ledger. However, it is important for other reasons. Nowadays people often keep their currencies on exchanges, because of convenience. With this storage, users will be more encouraged to keep their private keys safe on their phone, rather than keeping them on exchanges where anything can happen with their valuable coins. Samsung is one of the largest smartphone manufacturers, with this brand adding features for cryptocurrency… Well, let’s just say it’s huge. Samsung acknowledging users need this kind of features on their phones is a confirmation for anyone that might have doubts about crypto being what it is. 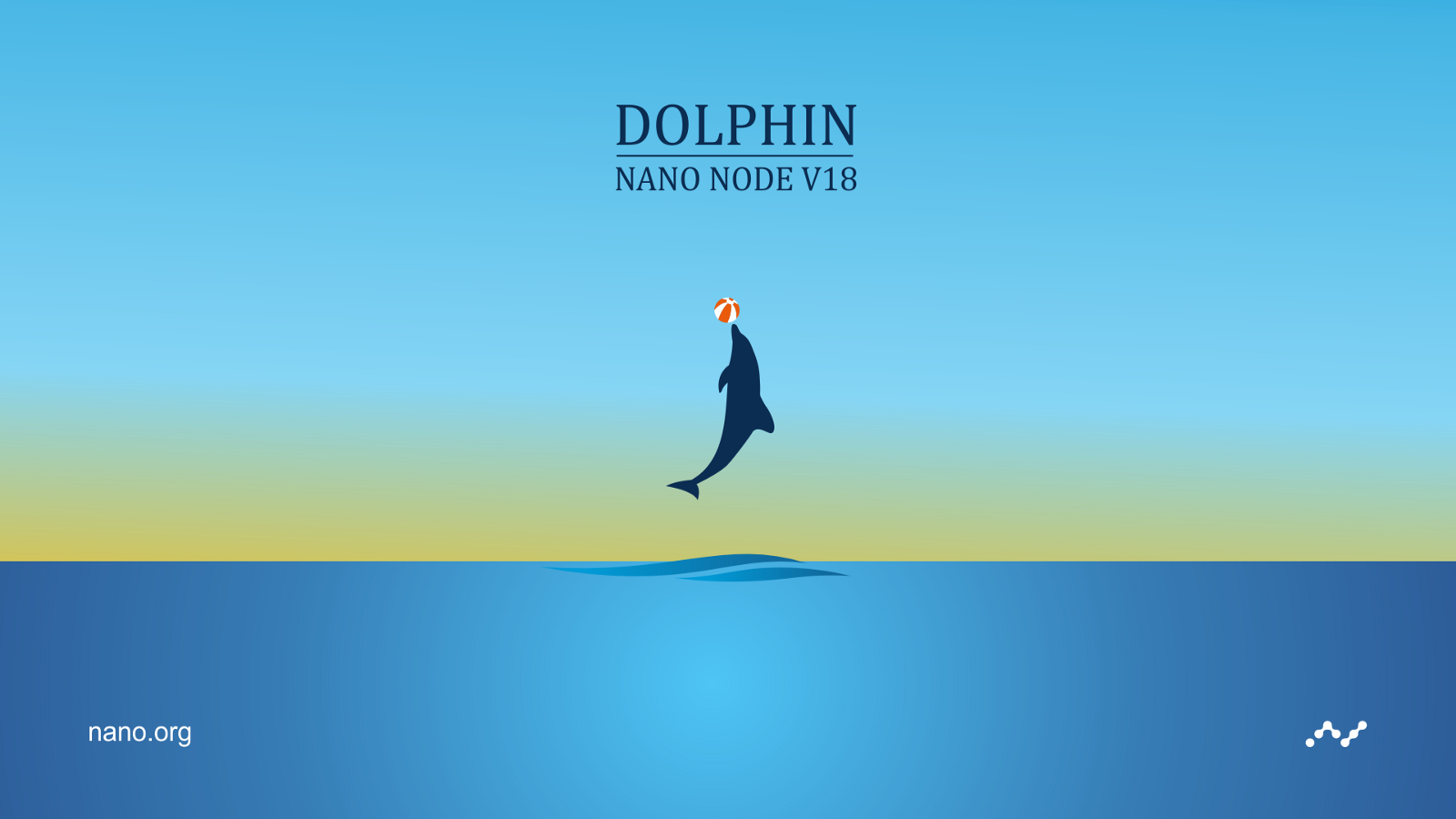 After proper development and testing, Nano team released the new Dolphin V18 Nano node software on their network. Their goals was to take already agile Nano network and make it even faster, smarter and lighter. They added a lot of optimizations regarding speed and added some features. One of those is local timestamp tracking which will allow a new method of monitoring all the Nano blocks. Another improvement is the cleaner code. If you were tracking Nano’s road since the beginning it will not come as news that Nano had a rebrand at some point. Firstly it was called Raiblocks. With Dolphin they implemented a change which erases any traces of Raiblocks name.

Brian Armstrong, Coinbase CEO shared his opinion on the QuadrigaCX exchange situation. Let us quickly remind ourselves – owner of the exchange passed away and many believe all funds on the exchange are unreachable and lost. Another thing that is speculated is that this was an exit scam. Armstrong believes this wasn’t the case with Quadriga CX. He said that this was one of the oldest exchanges in the existence. Coinbase had an internal investigation about this and Armstrong made a number of Tweets about it, but as he mentioned, these are all pure speculation. He concluded the story with a guess that CEO’s death might be a bad way to cover poor exchange management.

We talked a great deal about scams. One of the most popular ones is Bitconnect which collapsed about a year ago. Since only a year has passed, naturally, the investigation is still going on. Now, U.S. law enforcement agency is asking any ex-investors to give any information they might have about Bitconnect and their interactions with it. Questionnaire regarding the subject is already available online and one of the special agents on the case explained:

The FBI is seeking potential victims who invested in the cryptocurrency Bitconnect coin (BCC), which was first released through an initial coin offering orchestrated by Bitconnect in November 2016. Your responses are voluntary and would be useful in the federal assessment of this matter and to identify you as a BCC investor and/or potential victim.

One of the altcoins we reviewed in detail had a recent upgrade – BitCash. They announced they switched their mining algorithm. So now, instead of Cuckoo Cycle they are using x16r algorithm. 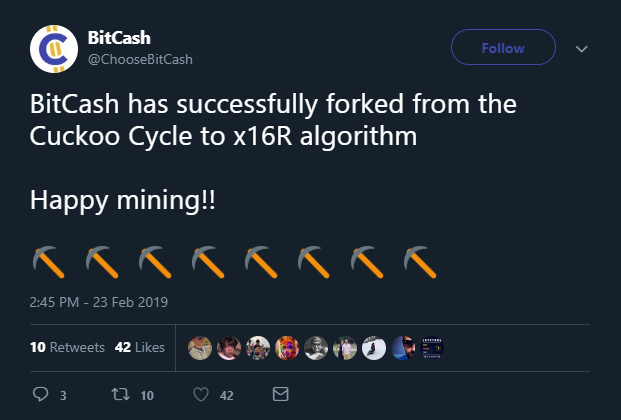 Emmanuel Macron, French president, encouraged using blockchain as a supply chain management in the agricultural industry of Europe. He expressed this opinion on the 56th Agriculture Fair in Paris. Pointing out few advancement which can be implemented in the system to keep the competitive edge, among others blockchain, he explained:

Let’s do this in Europe, the avant-garde of agricultural technology, by developing tools that will track every product from raw material production to packaging and processing. The innovation is there and it must be used in the agricultural world, it must be fully used because it is at the service of shared excellence and it will serve the consumer.

By bringing blockchain into this industry, agriculture would gain transparency in production as well as in the distribution. And Macron isn’t the only one who believes in blockchain. Chinese government has also issued a framework to promote blockchain and its usage in agricultural sector.

We wrote a very thorough guide about Nyzo. Now we are happy that other people started recognizing this interesting and unique project. Nyzo exchange listing finally happened. qTrade listed Nyzo and trading has commenced! If you haven’t already, sign up on qTrade using our referral link. On their Twitter, qTrade describes themselves as an exchange which lists original development coins. With all we known about Nyzo we can surely say it fits in that category. Another fact worth mentioning is that qTrade didn’t charge any fees for listing Nyzo. In this day and age of cryptocurrencies, this is very rare and generous. They also prepared everything promptly and solved all technical obstacles. Nyzo has great finality rates hence all deposits take under a minute and will be further improved on qTrade side. In all of this, we are very curious where the market prices take Nyzo. 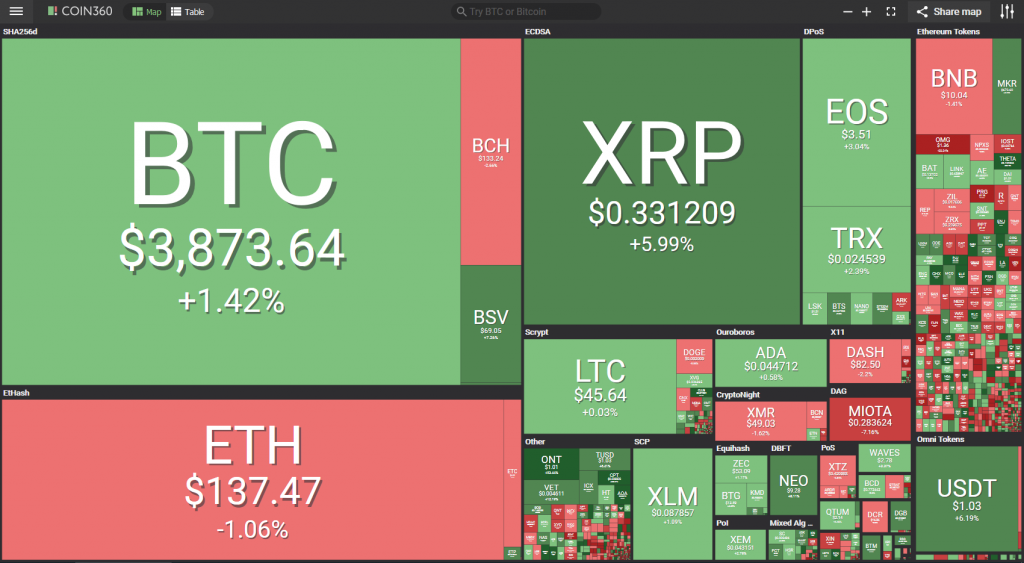 What a rollercoaster BTC had for the past week. It cleanly broke psychological resistance at $4k like it is nothing only to fall back down the very next day. Early bulls have been punished as bears reaffirmed their control of the market. Currently, BTC sits above resistance that turned to support. We keep watching that level for the past couple of weeks, it seems to play significant role and BTC respected it so far. We wouldn’t want to see it break down below it again. That would likely open path to new lows. Let’s see what happens next. 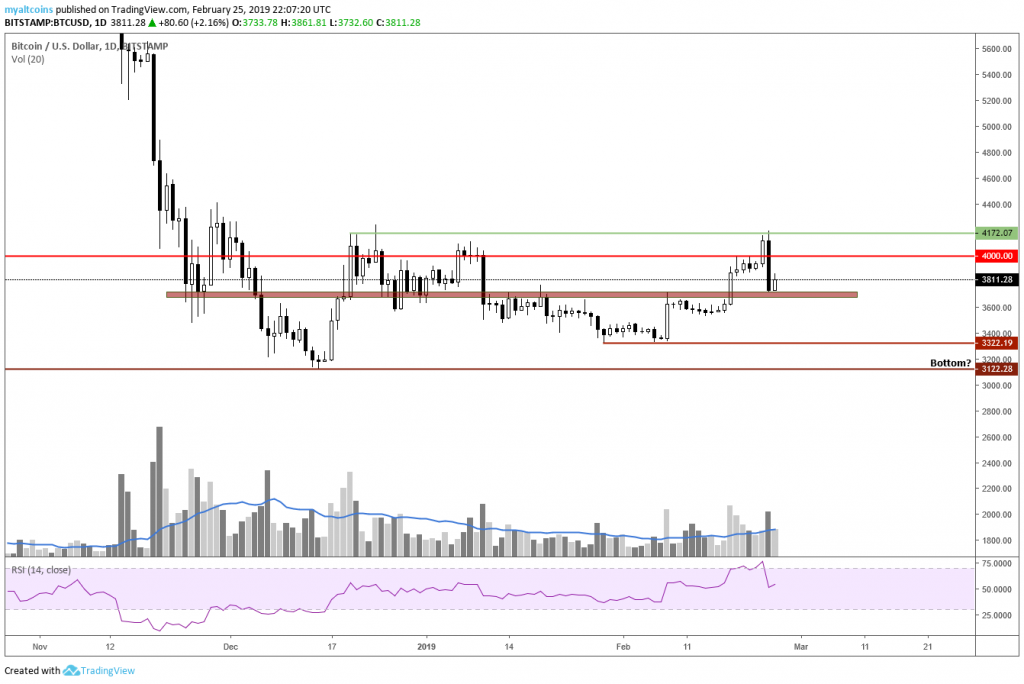 Almost the same thing happened with ETH. It got rejected at the resistance we outlined in our previous report and is now comfortably sitting above significant support rectangle.
Good boys also known as altcoins followed Bitcoin’s bumpy ride and ended the week where they started it. They showed many times that it’s pretty safe to sell any bigger pumps as the opportunity to rebuy lower regularly presents itself. 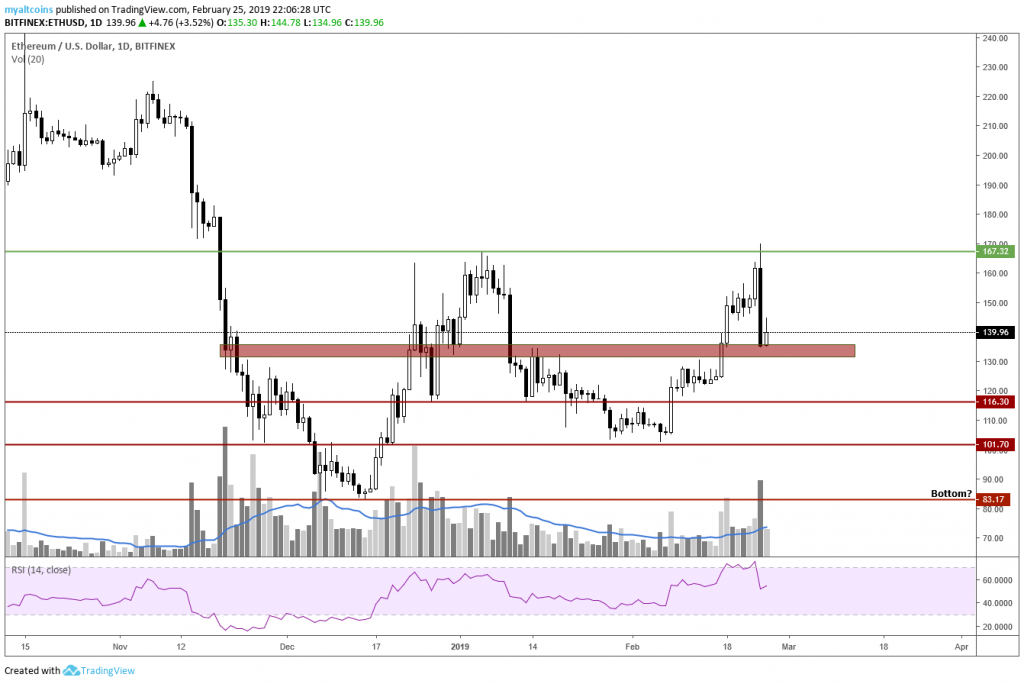