This week was filled with variety of news. MyEtherWallet, the most popular wallet service for ETH, got a fresh look and a redesign. Looking good! We continue the story of Cryptopia. They are still reluctant to comment any of the events and to reopen, even though they got a green light to do so. Nano joins Wirex family! We are always happy when NANO gets recognized. There are also some rumors about QuadrigaCX exchange. Maybe not all funds are lost! Enjoy these and many more news! MyEtherWallet (MEW) had a website redesign. First thing we noticed was moved was the cautionary pop-up window. Also, new features are added to improve safety and convenience. Now MEW automatically displays all token balances. Another new feature is connection to swap page where users can compare prices. MEW now uses an opt-in security feature: SendSafe which was developed by Coral Protocol. It uses smart contracts to reroute any outgoing balances, while Coral Protocol confirms that the destination is accurate and trustworthy. CEO of Coral Protocol, David Kuchar, commented SendSafe and why he wanted to develop it:

Our goal is to grow crypto adoption by reducing fear and fraud. SafeSend prevents users from accidentally sending money to a fraudster while fixing that gut-wrenching fear felt whenever the send button is clicked.

Everyone is still buzzing about the Cryptopia hack which we have been tracking since the beginning. Now, story continues. Even though Cryptopia got the green light to reopen the exchange, it stays offline. It still remains an unknown fact if the exchange will go back online. Ever since the hack Cryptopia has been mostly quiet. They still didn’t comment about any details of the hack nor did they comment if they plan to reimburse the lost funds to their customers. Victims of the hack are waiting restlessly to see how will this unwrap. For now there is a possibility of a lawsuit in which more than 40 traders are suing to get their balances back. No wonder Cryptopia is hesitant to comment anything or even reopen. We guess losing more than $23 million leaves a deep mark.

For those who are unfamiliar, Wirex Card is a crypto debit card. It can be purchased in two formats: virtual (Visa) and physical (MasterCard). It is one of the more popular methods of spending crypto – you get your cryptocurrency on a card like Visa and while making payments that currency is instantly converted and spent. Nano is the latest coin to join Wirex. Team behind Wirex also explain why did they specifically pick Nano to join the family. Nano has a concept of Block Lattice. That means every account has its own blockchain, unlike regular currencies which share one single chain and where users are competing to get their own transaction in the head block. Nano using Block Lattice means there is no limit to how many simultaneous transactions can be processed at once. Wirex also graphically explained this:

This leads to very fast transactions. Wirex made another feature specifically for Nano. For all in-store purchases (that are naturally made in Nano) with Wirex Visa you get a pay back of 0.5% in crypto.

Coinbase, a very popular exchange, payed a bounty to the finder of a bug in their system. The reward was $30,000. This has been the largest reward they had. So far mostly $100 to $1000 rewards were paid out. Coinbase confirmed that the vulnerability has been fixed. Naturally, they didn’t want to disclose any details to the public. They have several bounties depending on the severity of the issues so the bounty rewards go from $100 to $50,000 for the serious ones. About the bug program itself:

The Bug Bounty Program directly serves Coinbase’s mission by helping us be the most trusted way to use digital currency. In that spirit, the scope and philosophy of the program aim to safeguard two highest priority assets (“Sensitive Data”): Digital and fiat currency balances [and] customer information.

JP Morgan certainly had his fair share of turbulence regarding Bitcoin, cryptocurrencies and does he really support all of it. First, he announced Bitcoin is a fraud in 2017. A year later he took it back. Now, he is launching his own coin.  As if all of this wasn’t strange enough, but at the same time predictable, his coin will be created by a U.S. bank and it will be called JPM Coin. Why is he doing this? So that he can move around $6 trillion easily. This is actually the amount he moves daily. Besides such fast payments, there is a larger picture for all of this. Head of JP’s blockchain department explained:

The applications are frankly quite endless; anything where you have a distributed ledger which involves corporations or institutions can use this.

As you can see from the screenshot below, crypto community doesn’t take him seriously. Never did and never will, like any other banker. 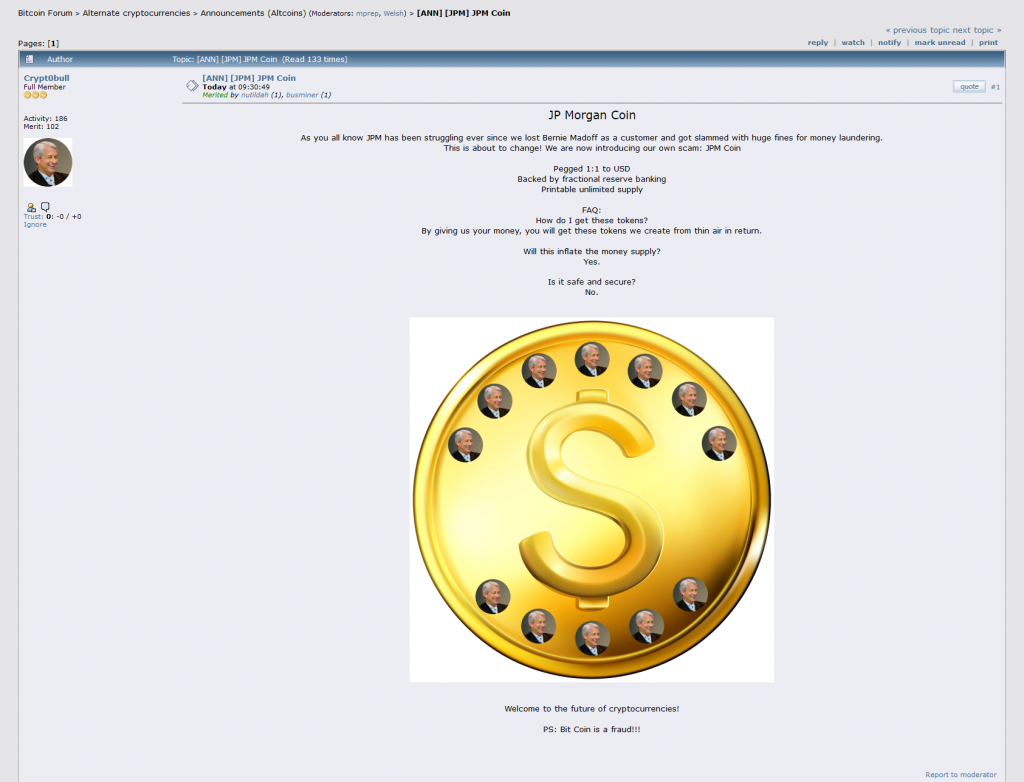 According to Bloomberg, there is a chance Gerald Cotton might have saved the private keys somewhere else. If you all remember, QuadringaCX’s CEO passed away and many believe all funds on the exchange are unreachable and lost. We all know very well that if a private key is lost, it is impossible to retrieve the funds. With this rumor, there is a new hope. Apparently, the team in charge of the exchange stored the private keys offline, in a company’s safety deposit box, ironically, at a bank.

Essentially we put a bunch of paper wallets into the safety deposit box, remember the addresses of them. So we just send money to them, we don’t need to go back to the bank every time we want to put money into it. We just send money from our Bitcoin app directly to those paper wallets, and keep it safe that way.

It is still uncertain how this will end. We sure are eager to see the ending and we will inform you about it as soon as it is out!

Police managed to expose a group which is suspected of being responsible for a crypto scam.  Apparently they managed to scam their way to $14 million. The group launched a cryptocurrency called “Cashcoin”. It happened year ago and they sold the currency to investors which were promised to get back double in returns. Lawyer of the arrested explains that they are innocent and wrongly accused. Policeman on the case commented:

The accused held meetings in Mumbai, Surat, and other parts of Gujarat, and lured people into investing their hard-earned money by promising to double it in two months. Initially, the gang repaid a few investors to lure more people in and then defaulted. Their intention was to cheat. 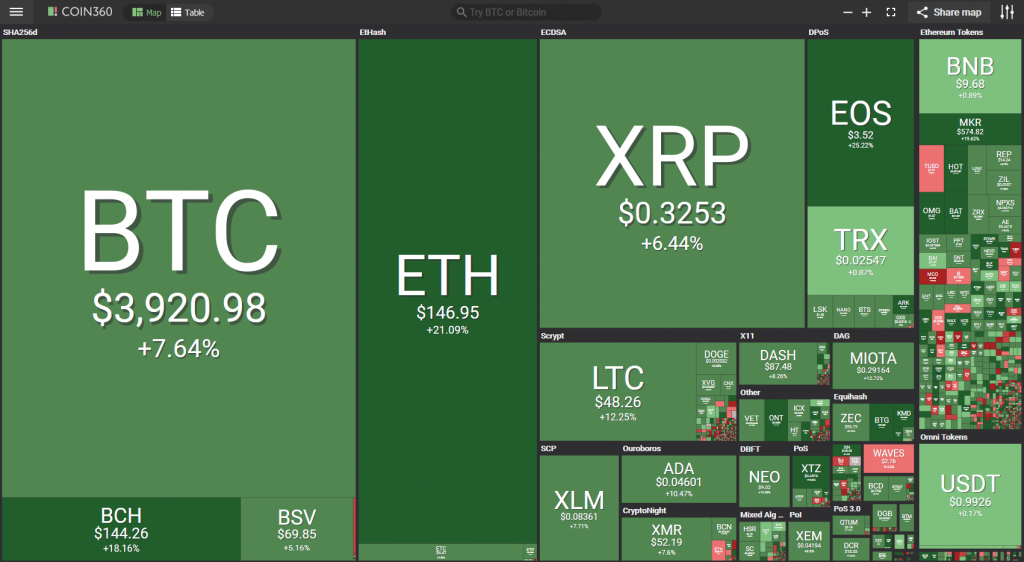 Nice week is behind us, we spent most of it consolidating and preparing for the next move. Then on Saturday nice short term uptrend started. Sunday continued the mini trend and led us to green Monday. It seems Monday dump’s aren’t a thing anymore. Price cleanly broke resistance we outlined in the previous report on a very nice volume. It seems $4,000 zone is in danger. Let’s hope we have enough fuel to break it. Don’t get carried away and put some profits of the table! Bear market is far from over until we get solid confirmation. 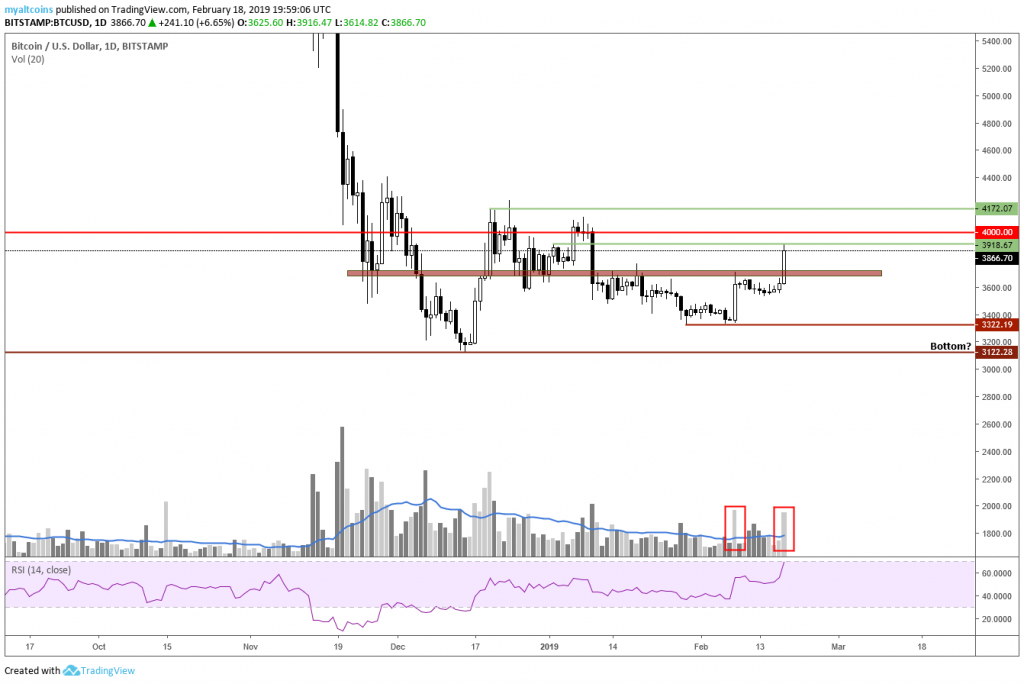 ETH is firmly back to its standard second place on market cap list. But XRP keeps breathing down its neck. Volume has been great for the past two days and the resistance has been broken convincingly. The path to test and hopefully break the $160-170 levels is open. For what it’s worth, the RSI hasn’t been this high since May 2018 when the price dumped hard so keep that in mind.
Other alts also had a nice week, EOS, KMD and ARK were leading the pack. It’s always nice to see alts pumping along with Bitcoin. 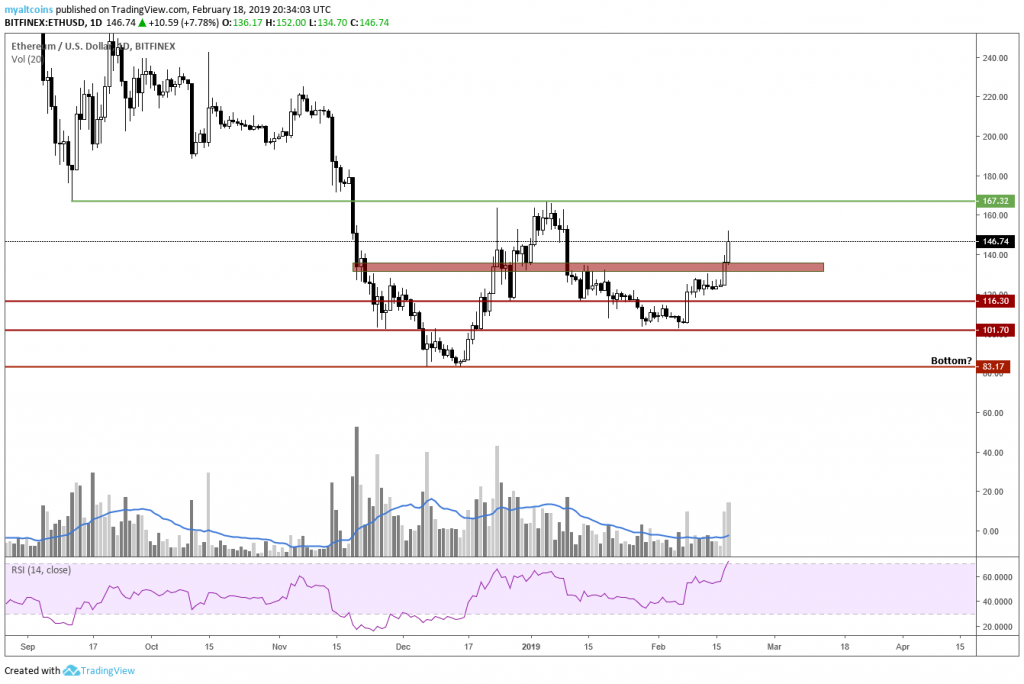