Welcome to the 12th Crypto Week In Review. This week we have a very wide spectrum of new information and topics. Some stories have an uncertain path in front of them, such as ETF. Then again, some other stories have a fresh beginning. John McAfee saga of a sailing president campaign is just starting. As well as Venezuelan new president who shows great promise for both crypto and Venezuelans. There are also some interesting points of the article so enjoy the read!

South Korean Exchange, Coinzest had a bit of a faux pas. They accidentally sent wrong cryptocurrencies to their clients in an airdrop. Around $5.3 million in Bitcoin and other cryptocurrencies were sent due to a computer error. The exchange was trying to airdrop We Game Tokens (WGT) when the unfortunate mistake happened. Along with that, some clients also received Korean won from the exchange. Coinzest announced they have no intent to compensate any losses which occurred during server issues. They also asked customers to return the funds they received because of this mistake. Surprisingly, about half of the Korean won was returned.

Another group of crypto criminals got a sentence for their crimes. Sindri Þór Stefánsson received a prison sentence of four and a half years for stealing Bitcoin mining equipment worth $2 million. Along with him, there were six other accomplices, however he received the longest sentence. Their target was Nordic IT company Advania. Now all seven of them have to pay a compensation of 33 million Icelandic króna (around $273,000).

Where do we even start with this one? Currently, McAfee, a known programmer and a crypto eccentric, is a wanted man in the U.S. because he didn’t pay his taxes for the last 8 years. He announced this in a video. At the moment he is in international waters on his Freedom boat where authorities can’t reach him. He also said:

The IRS has convened a grand jury in the state of Tennessee to charge myself, my wife […] and four of my campaign workers with unspecified IRS crimes of a felonious nature.

McAfee is a strong opponent of current US monetary policies and wants to change how things work from the ground up. Private cryptocurrencies can shelter users’ funds and with that the U.S. government will be forced to change its financial ways. And in his opinion, that is long overdue. However, this is not all. Being a wanted man isn’t going to stop him to run a 2020 campaign for U.S. president, out in the open sea. So, this John McAfee saga continues!

ETF story is well known in the crypto community. Cboe BZX exchange was discussing with regulators (for a while now) a rule change. This would allow to list the new Bitcoin exchange-traded fund, also known as ETF. This would be backed by VanEck and SolidX, both companies invested in blockchain. Latest deadline was February 27 and everything was looking as if ETF will finally get approved. However a government shutdown got in a way. The mentioned companies were discussing crypto-related issues and topics with SEC and meetings had to stop about a month ago. Now the proposal is being withdrawn, “temporarily”. It is unclear when the exchange will introduce the proposal again. Nonetheless, the entire community hopes this whole story will continue fast after the shutdown is lifted.

Since January 2018 a thief has been using a fake seed generator to empty wallets of IOTA users. Each time a victim would generate a new seed, they would get pointed toward a wallet which contained a private key the thief owned. The thief managed to steal around $11 million in IOTA in a year. Now he has finally been arrested and charged with fraud, theft and money laundering. It is unclear when he will be trialed, however, we are looking forward to hear his sentence.

We already discussed in detail Venezuelan financial situation and relationship with Petro cryptocurrency which was created by the former president, Nicolas Maduro. Now there is a new president, Juan Guaido who is a complete opposite, not only does he disapprove of Petro, he also supports Bitcoin. And has been doing so since 2014. He called out Maduro on his empty promises and lies about Petro. Also, the new president commented:

The Petro is the scam coin of the Maduro regime that pays to continue scamming the people. No more teasing.

We hope Venezuelan people finally got a decent leader who can show them what crypto is all about, and not a scammer just wanting to make profit and run with the earnings.

There are a lot of people who are fans of the Galaxy series Samsung produces. To be completely honest, we have been users of certain models of Galaxy series and we were very satisfied with them. New releases always offer something new and people are always very eager to find out what it is. This time we are thrilled to see a leaked screenshot which shows newest Galaxy model, S10, will have an integrated cryptocurrency wallet. 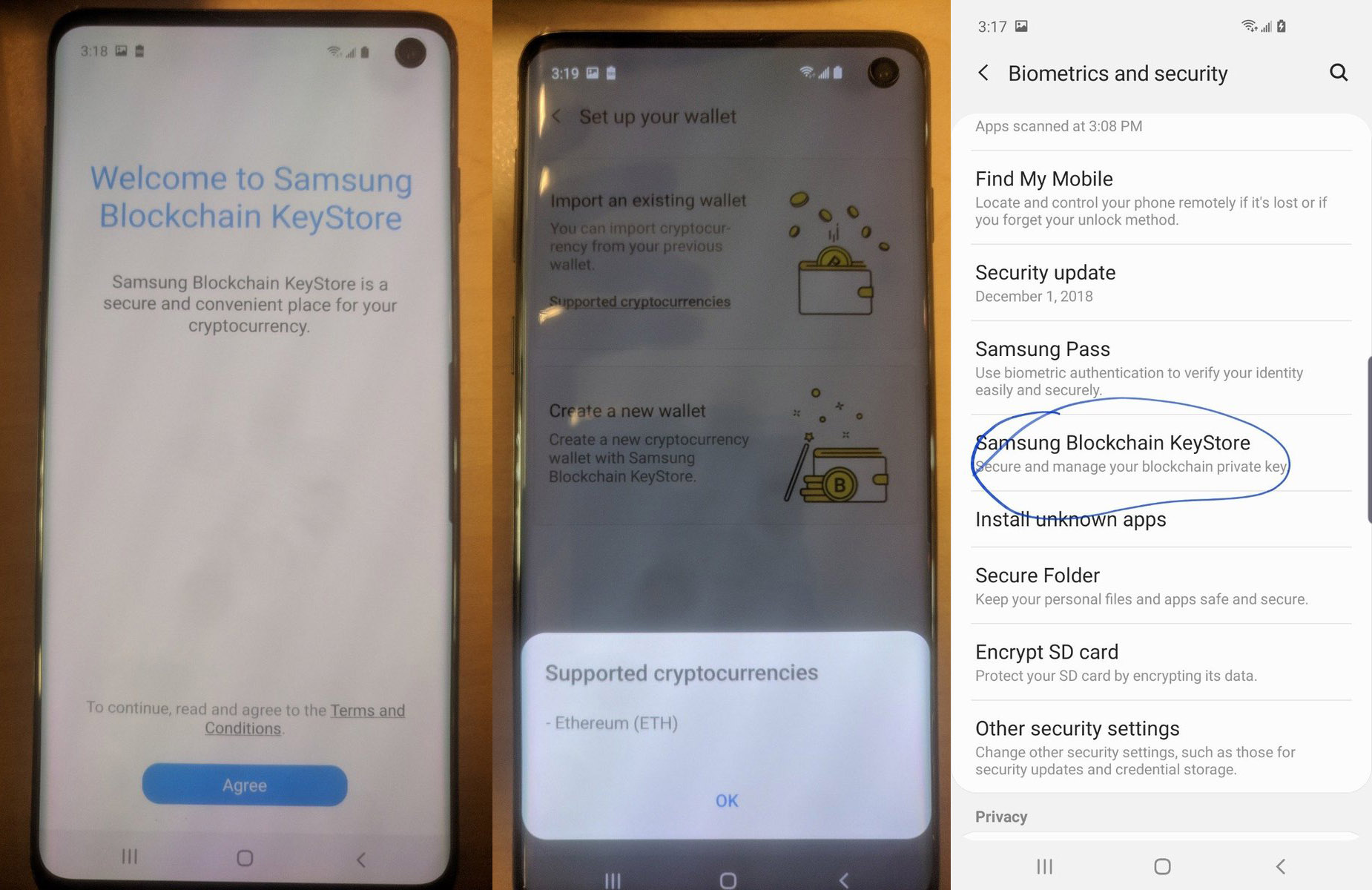 Pictures were leaked on Twitter from a username @GregiPfister89 and he never revealed the source of the screenshots. The new phone will be presented on February 20 and it is expected to reach stores on March 8. It is still uncertain if this is the truth or just a rumor. However, with crypto being more and more popular, it isn’t unusual at all that company like Samsung is looking to integrate crypto wallets in its ecosystem. 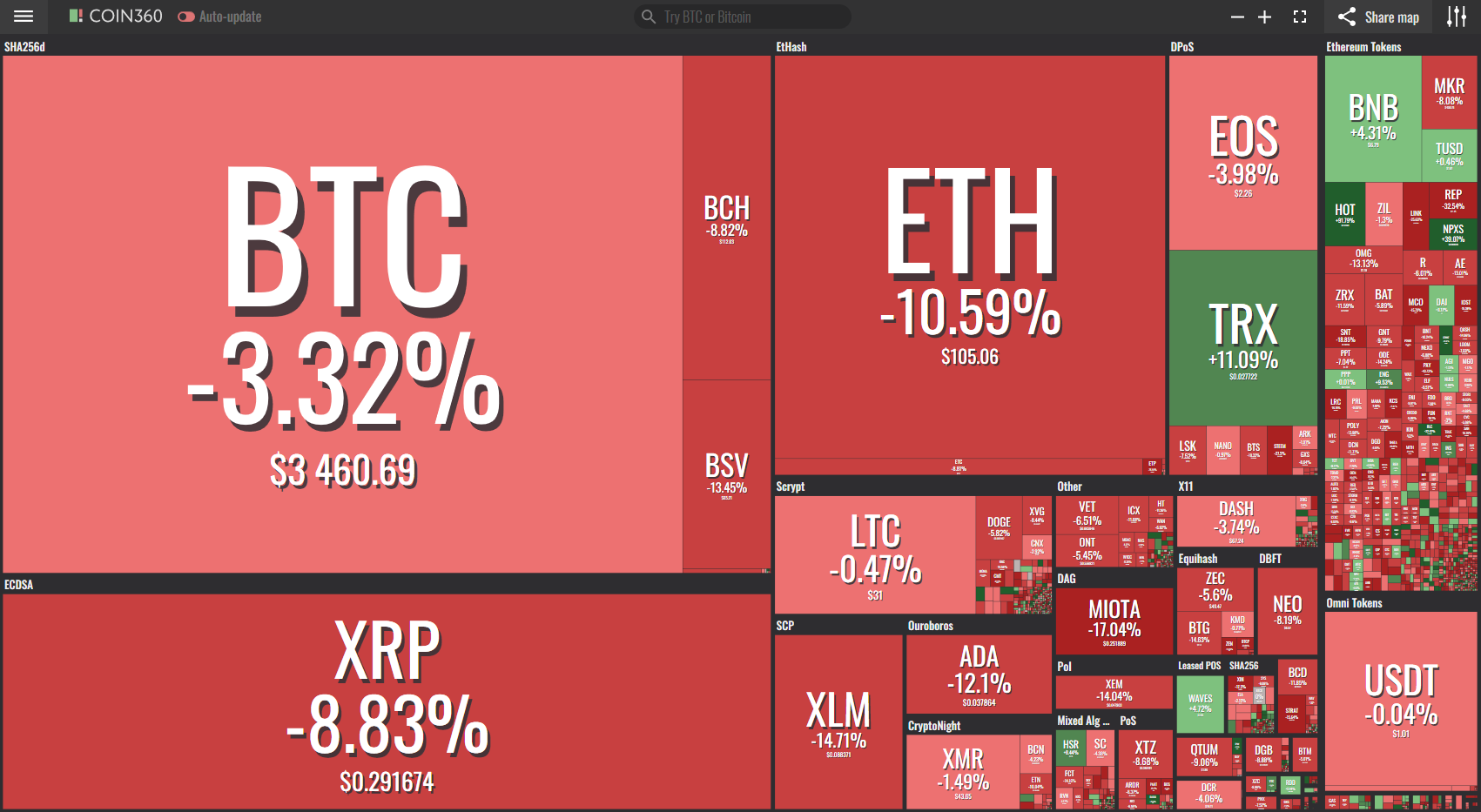 BTC continued to do its thing – being choppy in the horizontal trading channel that is hard to trade. It was good for some altcoins like TRX, HOT and especially MimbleWimble crew that had a great week. Then good old “dumping Monday” arrived and crashed the party. BTC price swiftly broke the support and currently, it seems like a clean break, but we will have to wait for the daily candle close to be sure. 2018 lows could be in danger but we will probably get at least a temporary bounce at $3.1k levels. 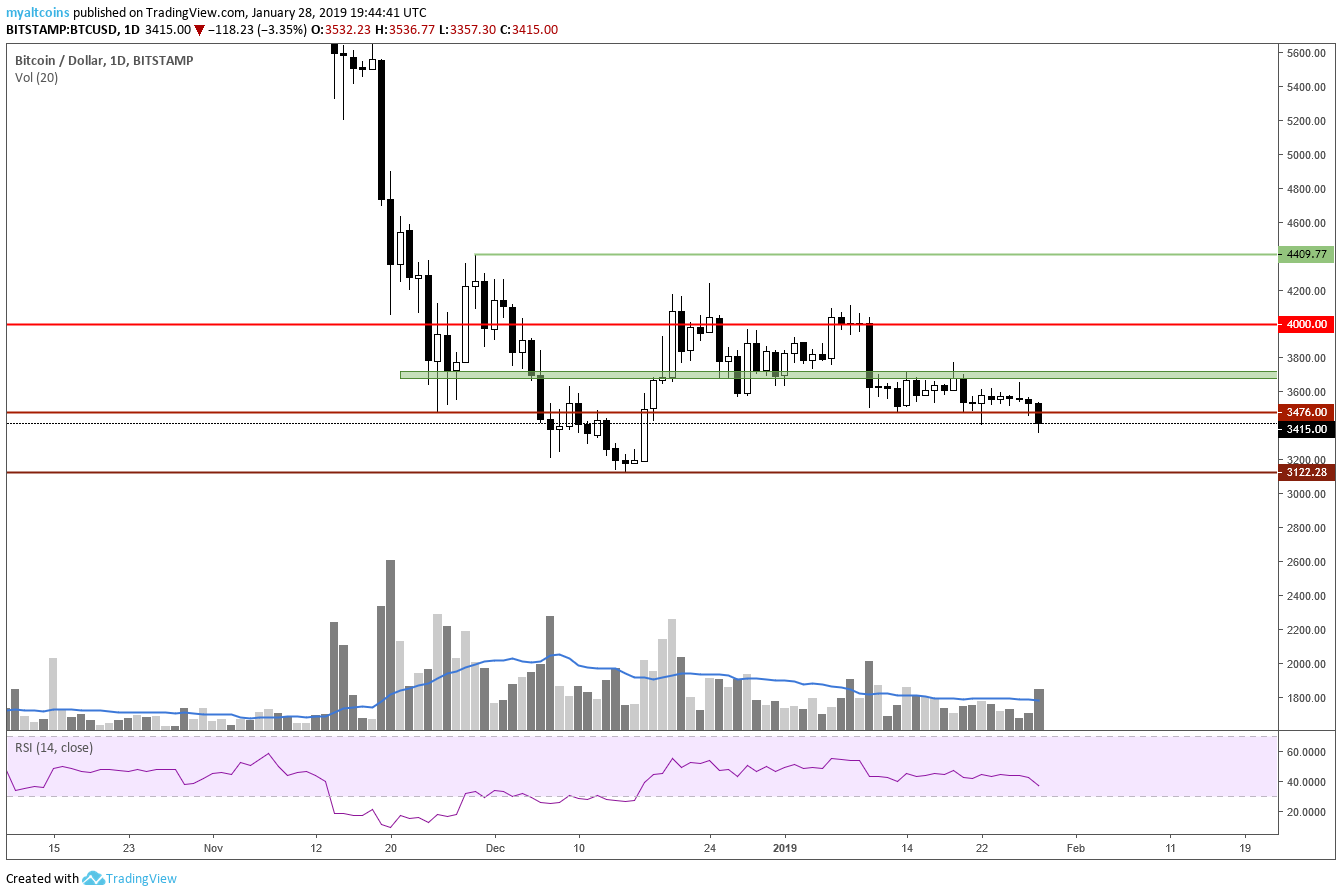 ETH was floating just above support level we outlined in our previous report. Until it cleanly broke down yesterday. The daily candle closed below, effectively turning support into resistance and fueling further dumping with a solid selling volume. We are expecting a bounce around $100 level outlined in the chart below. If the bounce fails to be convincingly strong, new lows can be expected. 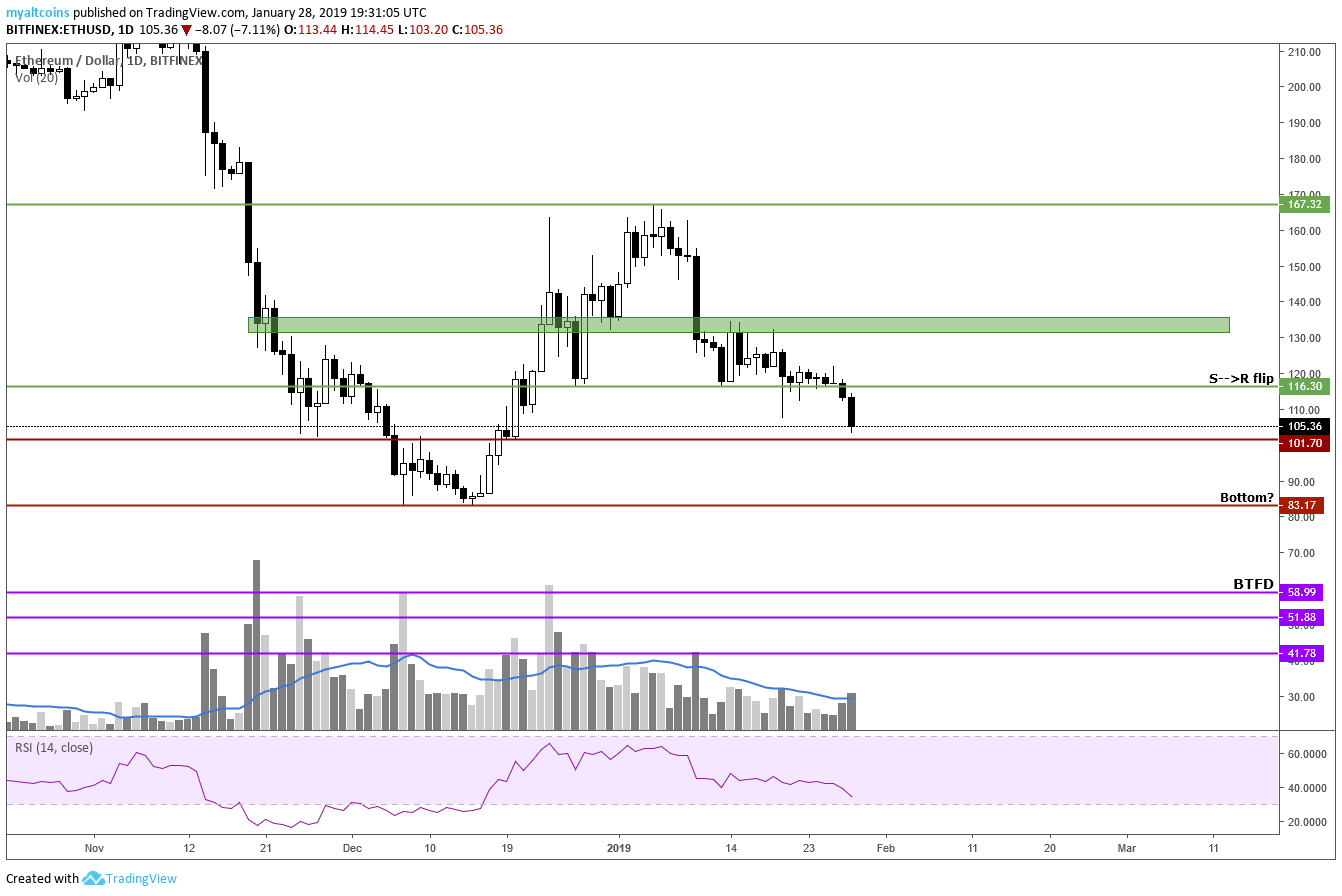