Welcome to our latest Crypto Week In Review! This week was turbulent from the beginning. We believe most of us were surprised with Cryptopia exchange hack. Yikes, those loses are still left to be counted. OTC trading desks are starting to be more popular and not only Coinbase goes in this direction. To be completely honest, we kind of felt ETH fork might be delayed. No, we don’t have any crystal balls, just a hunch. In our altcoin launches this week we had Grin, which had a spectacular launch. To find out other news that happened for the past week, read below and enjoy.

Bittrex, a U.S. crypto exchange is launching an OTC trading desk. This over the counter trading desk will support around 200 cryptocurrencies which are already open for trading by Bittrex. OTC trading desks will facilitate direct transactions between two parties. This is different from traditional exchange trading where orders are matched through an order book. The trading desk should already be live. Bittrex CEO, Bill Shihara said:

With one of the most extensive selections of digital assets of any OTC desk available, this offering will be another way for Bittrex to further advance adoption of blockchain technology worldwide, while also providing our customers with price certainty and a fast and easy way to trade large blocks of digital assets. 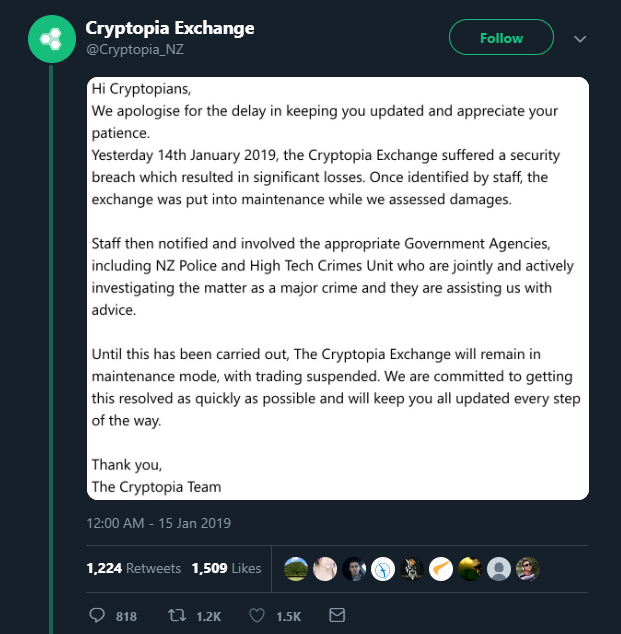 Popular New Zealand crypto exchange called Cryptopia got hacked. Cryptopia established itself as a go to place for trading low cap altcoins. At first they announced on their Twitter that they are having an unscheduled maintenance. However, day later they informed the public there was a major hack which resulted in significant loses. Currently there is an investigation going on and since this is now a police matter, the exchange can’t provide more detailed updates. Of course, this hack was met with suspicion from the crypto community. A lot of people speculated this is actually Cryptopia’s exit scam. Nonetheless, some people defend Cryptopia’s CEO and entire corporate team. They said they are very respected in New Zealand business circles and denied any kind of exit scam.

A lot of speculations are going on about how many tokens were actually lost and numbers don’t look good. We don’t want to spread misinformation and don’t want to confirm anything until it is official, but it doesn’t look too good. All that is to be done now is to wait for official announcement.

Constantinople turned into ConstantiNOPE. The announced ETH fork got delayed. Core developers announced the hard fork will be rescheduled for block 7,280,000. This should happen sometime later in February. Why the delay? Apparently, there was a vulnerability in Constantinople’s code, which was discovered by a smart contract audit company ChainSecurity. Of course, people weren’t happy about the delay and there are a lot of complaints from ETH community. MyCrypto had a very informative explanation on the entire situation in one of their tweets and explained the difficulties of auditing upgrades to smart contract platforms like ETH.

Binance announced some exciting news, mostly targeting European market. Their newest product is an exchange which features crypto-fiat trading pairs. For now, they announced it will be available for pounds and euros. This exchange is located on Jersey, an island which is a British self-governing dependency. This island was chosen because of its regulations that allow fiat trading in this manner. Binance Jersey has been in the works for some time now and these news bring a positive note towards making cryptocurrencies more accessible to broad public.

Lately, a lot of rumours from Russia have been circling around. According to them, Russia was to buy $10 billion in Bitcoin. This rumour was started by a self-proclaimed Russian government economist. He said Russia was to buy this much crypto to evade sanctions imposed on the country. However, Elina Sidorenko who is a chair of Russian Duma’s crypto group, discredited all rumours that were spread. On this matter, she said:

Under this statement there is not a bit of common sense, much less ideas that would be considered in government circles. The Russian Federation, like any other country in the world, is simply not ready today to somehow combine its traditional financial system with cryptocurrencies. And to say that in Russia this idea can be implemented in the next at least 30 years is unlikely to be possible.

Even if Russia wants to place its cryptocurrency assets now, it simply cannot do this, due to the fact that we do not have any mechanisms that would allow us to introduce a system, where these assets would be stored, which authorities would be responsible for it, which would be responsible for abuses and stuff. Such a model under the current criminal, financial and civil legislation in general does not fit. All over the world, a cryptocurrency is considered as a high-risk asset and a similar model, naturally, would not suit anyone.

Thailand’s Stock Exchange is planning to apply for a permit to open a new cryptocurrency exchange. People of Thailand are looking for an authorized and legitimate place to trade cryptocurrencies so the stock exchange is taking this matter in their hands. They are planning to launch both the exchange and a wallet. This is expected to happen sometime this year. Thailand is becoming very crypto aware. Last week their Ministry of Finance also approved permits for 4 startups involving crypto. Ever since there are regulations about crypto in the country, new applications are arriving. This only proves people want and need crypto as an (for now) alternative source of managing their finances.

Leaders of the South Korean exchange Komid were sentenced to serve jail time because they were faking volume. Choi, the CEO of the exchange, received a sentence of 3 years of jail time. Another company leader, whose identity is unknown at this point received a sentence of 2 years. They were both charged with fraud, embezzlement and missconduct. They wanted to inflate the volume of the exchange and they faked 5 million transactions. In this scheme they earned around $45 million. The judge said about one of the accused:

Choi has committed fraud for a countless number of victims for a long period of time…. Furthermore, he holds the financial authorities responsible for failing to keep track of the industry better.

On Tuesday, January 15th, after the long wait, the Grin mainnet has been successfully launched. There were some slight issues during the launch, the starting mining difficulty was set a bit too high so it took a while to mine the first block. But it was set as a proof that there isn’t any premine and it prevented any insta mining. Genesis block also includes the hash of the latest Bitcoin block at a time and serves as a final confirmation that there was indeed no premine. Second issue set mining pools on fire. They had trouble enduring the extreme load caused by the lack of minimum difficulty option in Grin miners. But the issue has been quickly solved and pools stabilised. The launch was as fair as it gets, even though the competition from mining farms was extreme.

147k 1080ti GPU’s is the approximate power of Grin network currently. Pretty secure network already, we will see how sustainable is it when initial hype wears off. On the other side of mining spectrum Obelisk already announced Grin ASIC miner. Pre order price is set to $3k and the retail price will be $6k. It will supposedly have the power of approximately two hundred 1080ti GPU’s on an ASIC friendly Cuckatoo31 mining algorithm.

Grin is already listed on many exchanges and went through turbulent price discovery like all new coins do. Its current price is $2.30, be careful with buying large quantities at this stage. Grin has high inflation and most exchanges where it trades at the moment are shady at best. 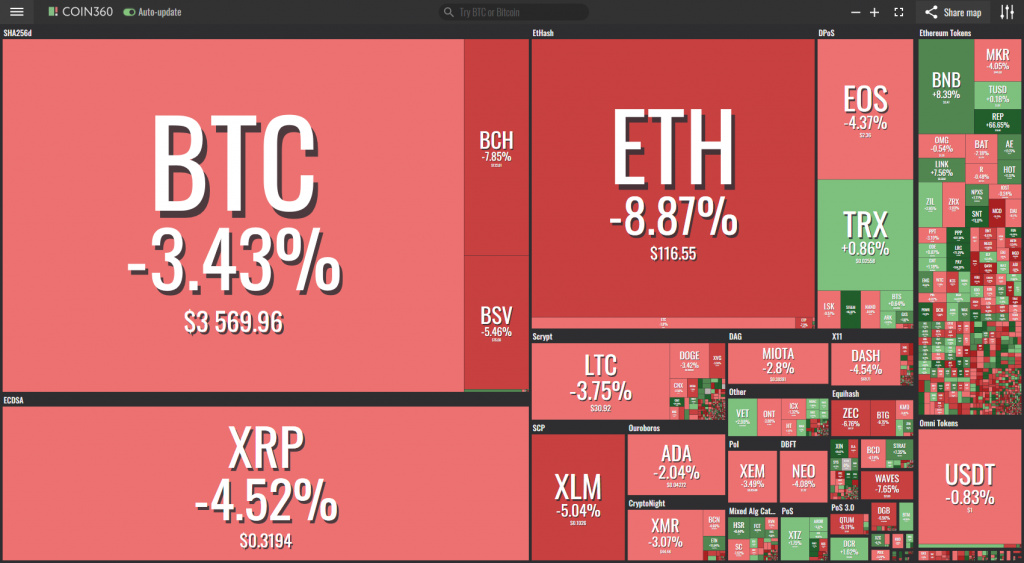 Bitcoin formed nice sideways trading channel and is consolidating in preparation for the next move. Both bullish and bearish scenarios are equally possible so we will just have to see what happens. But the weekly statistics show that trend is still bearish and that we continue to bleed slowly. 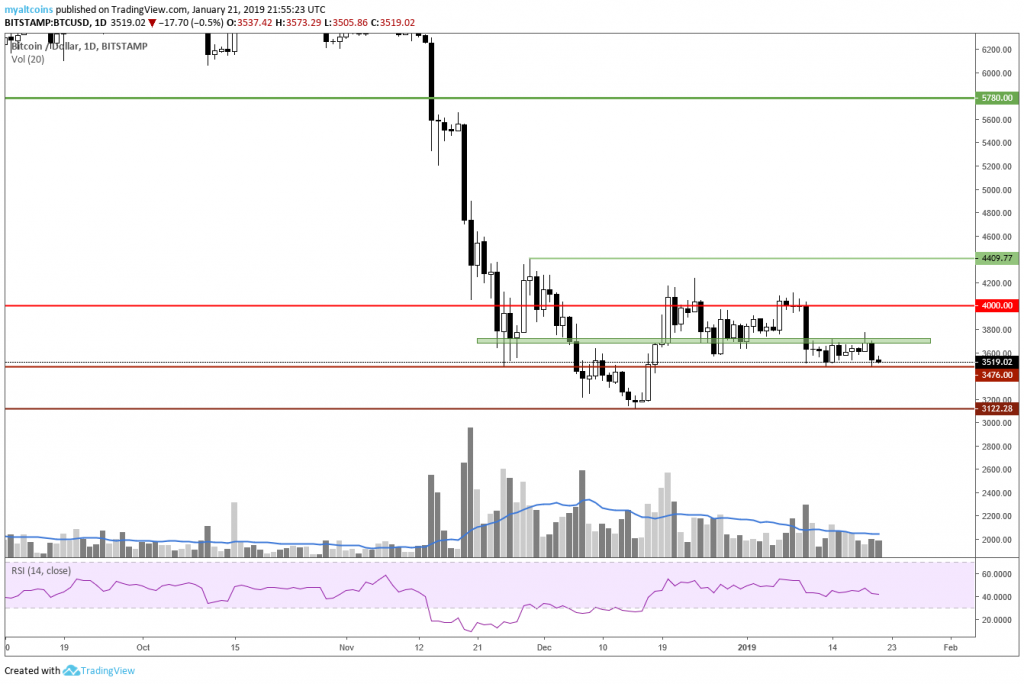 ETH had a red week, fork got delayed and the dumping commenced. It is currently floating just above significant support level. If the daily candly closes below it, levels around $100 will be tested again. Lets see if it holds up. Fingers crossed. 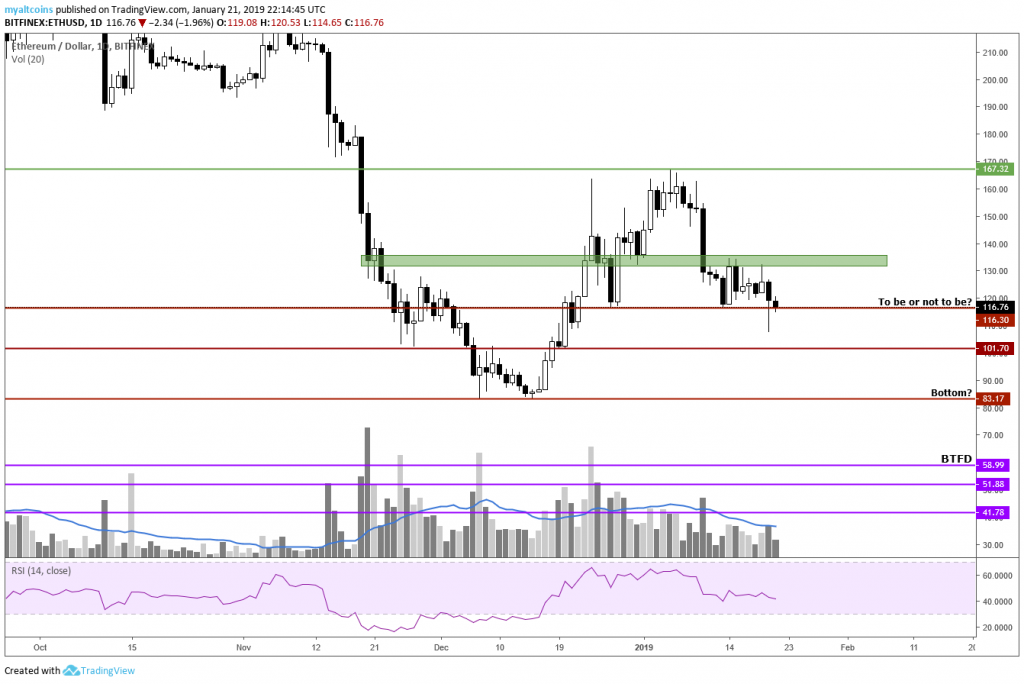